The cities shown in these images by Austrian photographer Gregor Sailer may look real, but they are actually a mix of fakes and copies.

The series, which is currently on show at the Rencontres d'Arles photo festival in France, is intended to blur the line between illusion and reality.

It includes a Swedish car-testing facility built to look like New York, faithful replicas of European cities in China, and combat training towns in the US and Europe.

Gregor Sailer named the series The Potemkin Village, in reference to the legends of portable, counterfeit villages built in the reign of Russian empress Catherine the Great by her field marshal Grigory Aleksandrovich Potemkin.

The story goes that Potemkin built a series of phoney settlements out of painted wood to impress the empress, and to disguise the real, dilapidated state of the region. The phrase has since come to describe impressive facades that mask unpleasant truths.

Sailer began the series in 2015. He researched the original myth and found two politically charged recent examples of these ghost cities in Russia, where canvas and wallpaper had been used to mask vacant properties during a visit from Putin in 2013.

He went on to visit more site around the world, in countries including France, Germany and the USA.

"The tightrope walk between illusion and reality has always kind of accompanied my work, but it has never been the main subject within a project before," Sailer told Dezeen.

"The effort and investments to construct all these large cities is very impressive," he said. "Even though I knew that everything was fake, these mock towns and villages seemed to be kind of real. There's a certain loneliness to walking through these places."

For each location, Sailer only took a single photo using an analogue large-format camera. In some of the military towns he only had a short window of time in which to choose his angle and take the image.

"I often had to realise the photographs under pressure, especially in the restricted areas, you know that you just have one chance," he said. "You can't repeat anything. One shot per motif is my personal way of working and sharpens the consciousness."

The images are largely unpeopled – an intentional decision by the photographer to add to the eery feeling of the images.

"I have always been interested more in the tracks and signs of humans than in images of them. For me the lack of people in such areas increases the surreal and oppressing atmosphere," added Sailer.

The photographer's aim is to challenge the idea of illusion in photography, to question whether a photography can truly capture the authenticity of architecture. He sees two layers of imitation in each image: the first is the scene captured, and the second is the photograph itself. 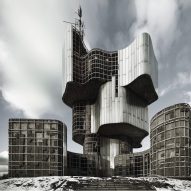 "It is fascinating but also scary what efforts and energies are invested in our days to create such illusions," he said.

"Especially in the MOUTs (military operations in urban terrain) where is difficult to assign these urban structures to their 'real' geographical origin," he added, explaining that troops can't be allowed to recognise the area.

The Potemkin Village is on show at Rencontres d'Arles photo festival until 23 September 2018. Sailer has also published the series in a book by the same name.

Other photographer who work with surreal environments is Edward Burtynsky, whose abstract aerial landscape photographs look more like paintings.