Vast underground neighbourhoods are built to house an influx of migrants into Seoul, following the reunification of North and South Korea, in this conceptual proposal by Bartlett graduate Natasha Marks.

The project, titled The United Peninsula, anticipates a population surge into the South Korean capital, following the removal of the border that has divided the Korean Peninsula since 1945, the end of the second world war.

But rather than building upwards to increase density, Marks proposes excavating underground, creating new residential areas that connect up with the city's already impressive network of underground shopping malls and transport links.

"Seoul is locked in by a green belt which limits urban sprawl," said Marks in her project text. "In order to house the sudden increase in the population, the project looks at how Seoul can become more compact."

"Existing living blocks are maintained but canyon-like forms are carved out below existing street level to generate more area for living," she explained. "The project causes minimum impact to the existing area. The existing high-rises in the area do not need to be knocked down and built higher. 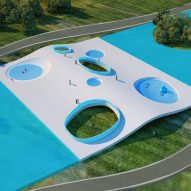 Marks completed the project for Unit 14, one of the many studios that make up the MArch programme at The Bartlett School of Architecture in London.

Tutored by Jakub Klaska and Dirk Krolikowski, students were asked to explore moments of "pioneering sentiment". Marks' classmate Sam Coulton came up with a vision for an environmentally friendly cemetery in London.

Marks' aim was to explore how urban densification could be achieved without building skyscrapers.

She used used Depthmap, a spatial analysis programme developed at the Bartlett, to understand the current movements of pedestrians in Seoul and to pinpoint underused locations that could be suitable for new neighbourhoods.

She also carried out daylight analysis to ensure light would not be blocked by existing buildings. It also informed the geometries of the terraced underground levels she designed.

"The programme can assess spatial arrangements at a building scale, which I used for the design process," Marks told Dezeen.

"The software aided an understanding of the connectivity and accessibility of Seoul's street network. This then informed my choice of site."

Existing roads and shops would be sunken below ground to give daylight priority to housing, and to create a completely pedestrian street level. By building down, Marks also envisions improved horizontal connections with Seoul's underground railway.

Old derelict defence bunkers beneath the city – one of which was recently converted into an arts centre – would be knocked through and converted into parks, to help bring daylight down to these cavernous neighbourhoods.

Earth excavated during the creation of the caverns and a sunken canal would be used for landscaping.

Marks has also designed facilities to help North Korean migrants settle into their new lives south of the former border.

"The proposal includes resettlement centres, an existing method in Seoul of helping North Koreans adjust to South Korea," she told Dezeen. "The main goal of these centres is to introduce North Koreans to the differences in the two cultures, most notably technology and the economy gap."

North Korean construction methods, which largely involve timber, would be favoured for familiarity. In the same vein, walkways and parks would be designed to help foster relationships between different cultural groups.

Architects have been imagining how reunification would affect life in North and South Korea ever since the two countries agreed in 2000 to work towards a removal of the border.

Mass Studies founder Minsuk Cho won a Golden Lion at the Venice Architecture Biennale in 2014 with his exhibition that imagined the future of the two nations.

Other proposals include a graduate proposal for buildings that promote peace and a vision for an underground bathhouse that spans the border between the two countries.