A group of artists in Taiwan have transformed a 10-metre-tall brutalist concrete loudspeaker, formerly used to broadcast anti-communist propaganda to China, into an art installation.

The speaker will play work by three Taiwanese artists – Hsia-Fei Chang, Wang Fu-Jui and Ada Kai-Ting Yang who is curating the show with Berlin-based artist Augustin Maurs – for the event called Sonic Territories.

Located on Taiwan's Kinmen Island, less than four miles off the coast of mainland China, the former broadcast tower has an enormous concrete facade that is embedded with 48 military-grade loudspeakers.

Until the late 1970s, the three-storey structure was used by the Taiwanese government to direct anti-communist propaganda to China's coast. The speakers have a range of up to 15 miles allowing the sound to travel across the strait to the Chinese city of Xiamen.

As part of the programme the works will be played at a lower volume than the intrusively loud broadcasts during the structure's previous use.

"From what I understand, it was really loud, and for some, disturbingly loud," explained Maurs to Artnet. "They are not necessarily good memories for the people of the island."

There will also be a seven-day workshop in the week leading up to the performances, hosted by the five artists, which will explore current-day tensions between Taiwan and China. 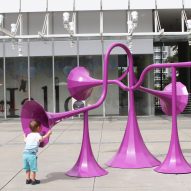 The artists intend the project to "play with the idea of territory as geographic, but also as sonic and mental entity."

Kinmen Country Choir, members of which lived through the original broadcasts, will make a guest appearance. "Art doesn’t have to be explicitly political to be political," said Maurs.

The opening of the installation on 26 August will coincide with the 60th anniversary of the Second Taiwan Strait Crisis, when the People's Republic of China shelled Kinmen Island to 'liberate' the territory and test America's resolve to support Taiwan.

"It is tricky for the Taiwanese. I tried to speak about those things, but it's very difficult. There are a lot of opinions, and it is very subtle," continued Maurs to Artnet.

Images are courtesy of the Department of Tourism, Kinmen County Government.