Six colourful sculptures that swallow, modify and regurgitate sounds have been installed at the High Museum of Art Atlanta, as part of an installation by Japanese artist Yuri Suzuki.

When visitors speak into one of the sculpture's horns, the travels through the installation before being played out through another horn. The type of sound produced depends on where you are listening or speaking.

"My idea was to create an unexpected and unusual audio experience," Suzuki told Dezeen. "I wanted people to start impulsive communications through these sculptures."

"For example, in public space in general in Japan or UK, people don't tend to have conversations with strangers," continued Suzuki.

"However through this experience you will communicate through audio to start conversation or making communication with others."

"Using horns and pipes the acoustics can travel from one end to the other in a playful way," explained Suzuki.

"By kneeling down to listen or sitting between two pipes, sounds can be transported from different parts of the sculptures to create a fun and unique listening experience."

Two of the six sculptures are parabolic dishes that are positioned opposite each other. By speaking into the dishes, visitors are able to send audible messages to the opposite dish. 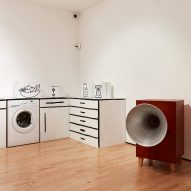 Yuri Suzuki's musical appliances are designed to enhance your mood

"One of the most intriguing pieces will be the Parabolic dishes," said Suzuki.

"These require a certain amount of exploring, finding the exact spot where you can hear the reflection of sound at its most prominent. Actually I was inspired by the sound mirrors in Kent that were originally built by the UK's national defense force in the early 19th century."

"Working alongside the engineers the design was tweaked to make the piece acoustically sound as well as structurally safe," he continued.

"This required changing the sound horns to faceted horns and adding extra supports to enhance the structural sterdyness."

The installation will be located at the High Museum of Art's Sifly Piazza until 7 October 2018.

Suzuki's Sonic Playground is the latest in an annual series of installations commissioned by the museum for the Sifly Piazza. Last year, Spanish designer Jaime Hayon created the Merry Go Zoo – a set of striped interactive sculptures and an exhibition of new work.

"Sonic Playground continues the High's multiyear initiative to animate its outdoor space with commissions that engage visitors in participatory art experiences," commented the museum in a statement.

"It is the High's first venture into exploring the notion of audible play — how the sounds all around us can be constructed, altered and experienced," it continued.

"The installation transforms the piazza into a welcoming atmosphere for socialising and recreation and serves as a stage for performances and art-making activities the High is co-organizing with local arts organizations."