Greek studio Kapsimalis Architects updated a sequence of cave-like subterranean spaces and vaulted rooms in this holiday home on the island of Santorini.

The house is located in the village of Imerovigli, close to Greek isle's capital Fira. Its position on a south-facing clifftop provides expansive views of the Aegean Sea and the rest of the island.

The studio reworked existing amorphous cave rooms that extend back into the hillside with a sequence that culminates in a bedroom with an adjoining bathroom and wet room.

The original property was comprised of several distinct parts, including the main house, a former warehouse submerged in the volcanic earth, and a pair of outhouses containing a bakehouse and toilets.

The modernisation project overseen by Kapsimalis Architects focused on retaining the outer form of the building, while reconstructing the smaller outhouses and simplifying the complex interior layout.

"The main idea of the proposal was to maintain the existing traditional architectural forms of the exterior, and to show up the diversity and the values of their interior spaces," the architects explained.

The reconfigured interior contains several bedrooms distributed throughout the main house and former storage spaces, which are connected to living areas that open onto terraces and a small patio.

A prominent new staircase forms a spine that extends from the top of the house down towards terraces containing three pools of different shapes. These outdoor spaces are flanked by a white wall that provides privacy from the adjacent pedestrian alley.

The central staircase roughly divides the house into two parts, with the main house on one side separated into two spaces with attic sleeping areas incorporated beneath the high vaulted ceilings. 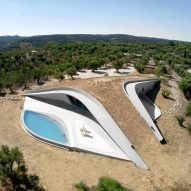 A curving staircase leads up from one of the bedrooms to a rooftop terrace featuring a fourth circular pool. The pool is partly embedded in the roof, resulting in a bulge that is integrated into the smooth white-plastered surface of the living room's ceiling.

White plaster is used throughout the interior to unify the spaces while accentuating their various edges and curves. The paleness of these surfaces is complemented by furniture with earthy tones intended to recall the hues of the Mediterranean coast.

"The white as the main colour of the internal space aims to showcase the bare beauty of it and to create a serene, contemporary space that explores the border lines between light and shadow," the studio added.

The spaces towards the front of the building contain a kitchen, dining area and living room that connects with a patio. The patio is shaded by a suspended circular canopy and a features a curving set of steps leading up to a pool looking out across the village.

Kapsimalis Architects have completed several other holiday homes on the Greek island of Santorini, including a bright white summer house on the island's coastline that comprises a series of staggered blocks to reflect the traditional housing on the Greek island.