Mexico's next president has called a referendum so the public can decide whether to continue the construction of the capital's major new airport, designed by Norman Foster and Fernando Romero.

President-elect Andrés Manuel López Obrador will hold a public vote in October 2018 to determine the fate of the New Mexico City International Airport project, he announced last week, despite the fact that construction has been ongoing since 2015.

López Obrador won this year's presidential election in a landslide victory, with 53 per cent of the vote. During his campaign, his main policy proposals included plans to cancel the airport that British firm Foster + Partners designed with Mexican studio Fernando Romero Enterprise (FR-EE).

The referendum is being held months before he officially takes office in December, leaving the fate of the project in the hands of the public. The result will be binding.

"So we don't make the wrong decision the best thing is to ask," said López Obrador, as reported by the Wall Street Journal.

"The Mexican people are not underage," he added. "They're an intelligent, wise people, and we're going with the democratic method."

López Obrador's main issue with the scheme is the expected $13.3 billion (£10.30 billion) cost – 60 per cent of which is being funded by the Mexican government, with the remaining 40 per cent made up from bank loans and debt security.

As a cheaper alternative, he suggest that the city's existing airport – which is currently operating at capacity – be kept and expand onto an existing military base nearby.

But cancelling the new airport would also result in a financial loss for the country, as the money already spent on three years of work would be wasted. The first phase – including a terminal to accommodate 68 million passengers per year, and three runways – was expected to open in 2020.

Foster and Romero designed the airport in response to a competition, and were selected as winners in 2014 with a proposal for one of the world's largest.

Described by Foster as "like nothing else in the world", the airport comprises a lightweight gridshell structure that forms the walls and roof of a 555,000-square-metre terminal, serving six runways. The lightweight glass and steel roof is shaped to resemble an X as a reference to the letter in the country's name, while its vaulted form draws on traditional Mexican architecture and symbolism.

The project was intended to be completed in two stages over eight years. The second phase would provide two more terminals. 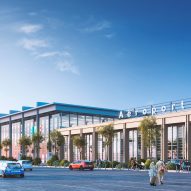 Foster's firm placed ninth on the 2017 Dezeen Hot List, a comprehensive guide to the hot topics and key figures in the architecture and design world.

The practice has a host of experience with airport design, having completed projects in London, Hong Kong, Beijing, Amman and Kuwait, to name a few. It also unveiled plans for an additional terminal building for Marseille Provence Airport last year.

Foster + Partners' other ongoing projects in Mexico City include a skyscraper set to match the height of the city's tallest, while FR-EE is behind its anvil-shaped Museo Soumaya.

Dezeen has contacted Foster + Partners for comment, but is yet to receive a response.

Renderings are by Dbox.