An exhibit celebrating the work of late American architect-inventor Richard Buckminster Fuller opens in Los Angeles next week. Here's eight of his futuristic designs, including "autonomous" prefab houses with bulging windows, an underwater island and a pared-back rowing boat.

The Geodesic Dome is a key example of Fuller's ambitions to make the most with minimum resources. A series of triangular elements distribute the stress of weight across the lightweight lattice structures, which are able to withstand heavy loads and harsh conditions, and provide free open space inside.

Fuller adapted the principles for the Geodesic Dome from an earlier proposal, created by an engineer after the first world war, and then patented the design in the US in 1954. Today, there are 300,000 interpretations across the world, according to the Buckminster Fuller Institute.

Over his career, Fuller designed a series of prefabricated residences called Dymaxion Houses – a term that merges the words dynamic, maximum, and tension. Although differing slightly, each house is made of elements that could be produced in a factory and airlifted to different locations. Fuller intended them to be constructed anywhere.

In a final proposal for an aluminium scheme, a central column forms the main structure. supporting its domed roof structure and flooring, with a window running in between. A number of "autonomous" design features are also included, like a cone that extends from the top to aid natural ventilation system and rainwater collection.

The Dymaxion series also included a three-wheeled car that could make extremely tight turns. The streamlined vehicle was designed as an investigation into the taxiing stage of an aircraft, and the first phase in developing an automobile for both driving on land and flying.

Fuller developed three prototypes during his lifetime, but two have since been scrapped or damaged. In 2010, British architect Norman Foster – Fuller's friend, student and collaborator – built a replica of the car to replace one of the lost designs.

Not limiting himself to any one discipline, Fuller took on cartography with this invention – credited as the first two-dimensional map of the entire Earth's surface that shows it without distortions.

To create the piece, Fuller projected the world map onto the surface of a three-dimensional icosahedron, which was then unfolded and laid flat. 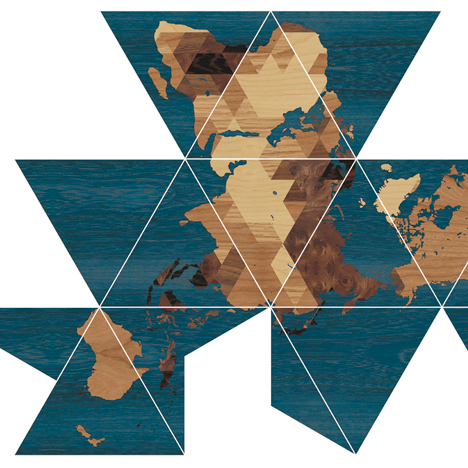 Fuller's interpretation of the rowing boat sees the vessel pared back to two streamlined and lightweight hulls, known as needles. The design positions the oarsman in an elevated seat, which can be accessed without any aid.

Foster said that Fuller considered the needles "his most refined design – the purest expression of 'doing more with less'" in a recent interview with Vanity Fair.

For the Fly's Eye Dome – Fuller's final prototype for low-cost portable housing of the future – he aimed to reduce the structural weight of the dwelling. The result comprises transparent bubble windows across a partial sphere made from fibreglass.

These bulging glass windows – which resemble the eyes of a fly – could be swapped for solar panels and rainwater collection systems, as part of the architect's continued ambition for an "autonomous dwelling machine".

For conducting offshore drilling, the Submersible is designed to be partially submerged underwater, to protect apparatus known as an oil derrick from damage caused by stormy weather. The caisson underneath adds buoyancy to the structure, which remains in a fixed position via an underground rig.

The concept formed the starting point for an investigation into creating a habitable, weather-resistant, floating city in Japan, but after Fuller's investor died, this proposal never made it off the drawing board.

The Vector Equilibrium Jitterbug Duo is a stainless steel wire sculpture, comprising struts arranged in tetrahedron patterns that are connected by hinges so that it shifts about when touched.

"[It] is one of the more fascinating kinetic sculptures in the exhibition," Edward Cella, who curated the upcoming LA exhibition, told Dezeen. "Specifically the sculpture uses an inter-connected, twisting-contracting, inside-outing dynamic action that allows for the fixed structural system to achieve the closest-packed unit-radius."