Australian Institute of Architects' Gold Medal-winning architect Kerry Hill, designer of the City of Perth Library as well as numerous award-winning hotels, has passed away.

Based in Singapore, Australian architect Hill was renowned as an expert in resort hotel design across Asia, thanks to projects including The Datai Langkawi in Malaysia and Amankora in Bhutan.

Australian Institute of Architects acting national president Richard Kirk has paid tribute to Hill as the architect whose body of work "has come to define tropical modernism in the region".

"Kerry was one of Australia's most renowned architects and he will be sorely missed by many," said Kirk.

"The significance of the work is that it responds sensitively to place through melding the local craft traditions, and cultural and climatic sensibilities of the east, with the technical precision of the modernist traditions," he added.

"Kerry has given us an enduring architectural legacy throughout Asia and Australia and as far afield as Europe and China."

Hill founded his studio, Kerry Hill Architects, in 1979. Among his first major projects were the The Darwin Centre in Australia and the Sukhothai hotel in Bangkok, Thailand.

The architect received the Aga Khan Award for Architecture for The Datai Langkawi hotel, which paved the way for many more resort projects.

These include several for high-end hotel brand Aman, in destinations including New Delhi, Tokyo and Shanghai, plus the Lalu Sun Moon Lake in rural Taiwan and the Desert Palm in Dubai.

In a 2017 interview with Dezeen, Hill said his studio designs every building "especially for its context and its place"

In an exclusive interview with Dezeen in 2017, Hill said his studio's approach was to always focus on creating contextually sensitive buildings that draw on local styles, building techniques and materials. 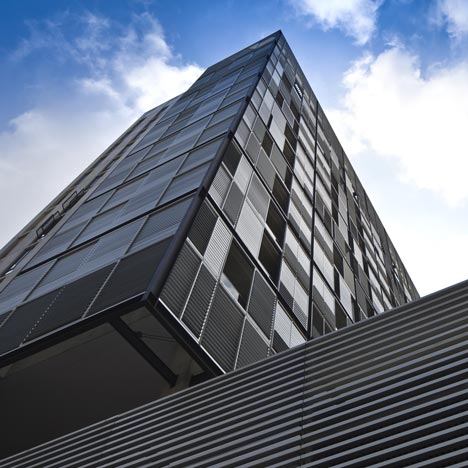 "I hope that Singapore doesn't have a style" - Kerry Hill on Martin No. 38

"We do not have a common architectural language," he explained. "We like to think that each building is designed especially for its context and its place."

"I don't believe in what I call 'plonk architecture'," he said. "What I mean by that is a Gehry here, a Gehry there – architecture at home everywhere and nowhere. I feel that you need to perpetuate the traditions within the culture and material of a place through your architecture, so that it is appropriate."

Hill was awarded the Australian Institute of Architects' Gold Medal, the nation's most prestigious architectural accolade, in 2006, described by the jury as "an architect of exceptional sensibility and expertise".

He was made an Officer of the Order of Australia (AO) in 2012, in recognition of his role as "an ambassador for Australian design in southeast Asia".

The architect also picked up the award for best housing design at the World Architecture Festival awards in 2012 for Martin No 38, his first residential project in Singapore.