David Chipperfield Architects has submitted its planning application for the IMPACT Centre, the proposed new home for the Scottish Chamber Orchestra, including a series of new visuals.

The 1,000-seat venue, designed by the David Chipperfield-led practice, is proposed for a prominent site within Edinburgh's New Town. Designed as a permanent home for the Scottish Chamber Orchestra, the building will also contain a 200-seat rehearsal space, cafe, bar and dedicated educational spaces.

The latest visualisations show the position of the concert hall in relationship to St Andrews Square – one of the New Town's principal squares. Named the IMPACT Centre, the proposed venue will stand directly behind the RBS headquarters in the Grade-A listed Dundas House.

Another view shows the view from the gallery, which surrounds the main auditorium, on the second floor of the building.

Through full-height windows, visitors to the building will have views across Dundas House and down George Street.

Further images show the facades of the building that have been redesigned since the initial visuals of the project were released earlier this year. The new visualisations show a more pared-back and uniform design for the building's lower floors.

"The facades of the new venue relate to the architecture of the New Town in both their order and materiality," said David Chipperfield Architects.

"The expression of a base, middle and top, found on other neoclassical buildings, is picked up by the composition of the venue's massing while the texture and tone of its concrete picks up the various sandstones found in the New Town," continued the practice.

"The metal-clad dome completes the crown of the building, announcing its public nature and aligning with the other civic buildings across the city."

The building's main auditorium will be raised above ground level to create an open foyer. This entrance space would have three public entrances, with a fourth planned to directly link to Dundas House's domed banking hall. 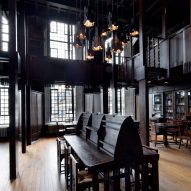 The firm is working with Edinburgh-based Reiach and Hall to deliver the building.

Imagery is by David Chipperfield Architects and Hayes Davidson.