Scottish architectural visualiser Alan Davidson, who pioneered the use of computers to create realistic digital images of buildings, has died aged 58.

He later pioneered the production of verified images – accurate digital representations of proposed structures set in real photographs that are created using survey data combined with realistic representations of the building's material and light-reflecting qualities.

Verified images – so called because they are verified by the visualisation studio as being accurate – became a vital way for architects to explain to both planners and the public what their creations would look like when built.

They can also be used as evidence if a proposed building is subjected to a public enquiry.

Davidson studied architecture in Edinburgh and moved to London in 1986, where he worked for Richard Rogers Partnership (now Rogers Stirk Harbour + Partners) before starting his visualisation firm to pursue his interest in the emerging field of computer modelling, which at that time was used only by the advertising and movie industries.

Architectural imagery at that time was produced manually by individual artists working in pen and ink or paint. 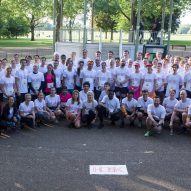 He was soon working for leading architecture studios around the world.

Key London projects that were visualised by Hayes Davidson during the nineties (but completed the following decade) include The Shard by Renzo Piano Building Workshop, 30 St Mary Axe – better known as The Gherkin – by Foster + Partners, Tate Modern by Herzog & de Meuron and the London Eye by Marks Barfield.

Davidson was diagnosed with motor neurone disease in 2012. In the last years of his life he fundraised through his charity Alan Davidson Foundation for the Motor Neurone Disease Association, organising a fun run in London's Hyde Park earlier this year that raised £52,000 for the charity. A fund has been created in his memory.

He died on Tuesday 28 August surrounded by family and friends.