3XN is designing an arena, five housing blocks and a police school, all with green roofs, for a development in Bergen, Norway.

The Copenhagen-based architecture studio said the arena would be a "modern-day colosseum" for the city, as part of the Nygardstangen district development.

"In developing this new arena, we considered the characteristics of Bergen as it is now, and envisioned how it can be in the future," said Jan Ammundsen, senior partner and head of design at 3XN.

"In our design we have tried to solve the urban and infrastructural challenges by creating an arena in human scale using warm materials, taking the local climate in to account. We will change the area from a place for cars to become a place for people." 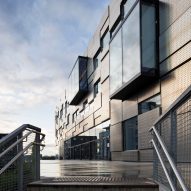 Bergen, which is on Norway's west coast, is built around a fjord and surrounded by mountains. The city's waterfront is home to Bryggen, an old wharf dating from the 14th century century that is a UNESCO world heritage site.

Along with the arena, which will host large scale cultural and sporting events, the mixed use development will include new housing, public plazas, a hotel, cinema and a police school.

The new district is the project of Nygårdstangen Utvikling, a group of developers including Norwegian property developer Olav Thon, EDG Property, and Rexir.

In 2017 the Danish architecture firm completed a 35,000-square-metre arena with an undulating wooden facade in Copenhagen, and is building an aquatics centre in Linköping, Sweden, from curving glass and timber.