Now that Norman Foster has declared summer over on his Instagram account, here's a look back at 10 of his best posts from the past three months, including an inflatable unicorn and a water bike.

The British architect, founder of Foster + Partners, is becoming as well known for his mastery of Instagram as he is for his buildings.

Determined to stop imposter accounts, the 83-year old set up @officialnormanfoster last year, recruiting his children to train him on the art of the perfect Instagram shot.

But this summer he truly came into his own as an Instagram influencer, by sharing envy-inducing candids that would put Kylie Jenner to shame. 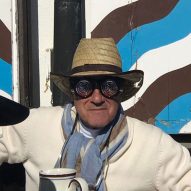 When he wasn't jet-setting across the globe between his architectural creations, he was taking the latest water sports gadget out for a spin, or lounging by the pool.

He announced the end of summer on 31 August, alongside a shot of himself peddling a water bike on a lake in Martha's Vineyard, Massachusetts.

Here's a look at 10 of his best summer Instagram posts:

"Trying out a new gadget"

In July, Foster shared a photo of himself gliding majestically across the Tisbury Great Pond on the island of Martha's Vineyard, on a personal motorised rubber ring.

Many people would look ridiculous in this scenario, but Foster brought his signature gravitas to the situation.

Get the Foster look: the motorised rubber ring is available from The GoBoat

Foster has a novel approach to avoiding UVA rays – he wore a personalised umbrella hat while perusing Walt Whitman's poems from On the Beach at Night Alone (but during the day and with company).

Few could retain the gravitas of a Pritzker Prize-winner while wearing novelty rainbow headwear, but of course Foster pulls it off.

Get the Foster look: the umbrella hat is available from eBay

A post shared by Norman Robert Foster (@officialnormanfoster) on Jun 8, 2018 at 7:12am PDT

Embodying the work hard, play hard lifestyle, Foster stopped for a refreshing beer and salty, carby snack after the gruelling cycle up the Muur van Geraardsbergen, a steep cobbled hill in Belgium.

After the 92-metre climb, one of cycling's most iconic challenges, Foster earned his pint of traditional Belgian beer and chips.

Get the Foster look: padded cycling shorts (essential for those bumpy cobblestones) is available from Decathlon

"Biking to the beach"

Foster took his love for cycling to the next level by biking on water. Once at the beach he whipped out his sketchbook, because you don't become one of the world's most well-known architects by slacking off in the sand.

Get the Foster look: Foster's bicycle is available to buy from Schiller

Norman proves that even man's best friend doesn't slip under the style radar – here he is sketching with Norfolk terrier, Ace, who's sporting a fetching grey tee.

Get Ace's look: put your pup in a t-shirt from American Apparel

"Time for the unicorn"

Giant pool floats are the ultimate Instagram power move. Ever since Taylor Swift rode into view clutching Calvin Harris on a blow-up swan last summer, any micro-influencer worth their salt has been shelling out for a rubbery pool accessory.

Chilling with your sketchbook in an inflatable unicorn the size of an elephant? Pack up your nudes and go home Kim Kardashian, Foster has won Instagram.

Get the Foster look: get your own slightly-less-majestic steed from eBay

A post shared by Norman Robert Foster (@officialnormanfoster) on Jul 1, 2018 at 1:40am PDT

It's not all fun and games for Norman – the architect took some time out to delve into a serious novel by Canadian author Steven Pinker, which explores violence on a global scale.

Of course he looked suave reading in repose.

Get the Foster look: The Better Angels of Our Nature by Steven Pinker is available on Amazon

A post shared by Norman Robert Foster (@officialnormanfoster) on Jun 1, 2018 at 5:52am PDT

"Having a great birthday!"

Norman's summer style came into full bloom as he celebrated his 83rd birthday wearing a super-bright floral shirt, with a cake served on a silver platter.

Get the Foster look: a similar petal-printed shirt is available from Paul Smith

Swimming is for normals, being pulled around the water by the latest gadget is for Foster.

He took some time out from his hectic schedule to mess about with more of his favourite gadgets, prompting some commenters to ask if he could be the next to play James Bond in the film franchise.

Get the Foster look: propel yourself through the water with ease with a Yamaha Sea Scooter from DiveInn

And it's all over. With his last ride across the Tisbury Great Pond on his water-going bike, Foster officially signalled the end of summer.

Break out the knitwear, polo necks and pumpkin spiced-everything, because it's time to find out what Foster has in store for the autumn.

Get the Foster look: give summer a send-off like Foster with a water bike from Schiller