Paltrow created items that reflect the design of her own home in California, as well as her travels and time spent in London.

"Every room is as chic as it is inviting," she said in a statement. "There's a layered quality – pieces from different places and times, accented by nostalgic objects amassed over the years."

One of Paltrow's favourite designs in the collection, according to the statement, is a curvy velvet sofa called Curvo that nods to mid-century Italian design.

Its figure-eight-shaped seat and similarly curved back come upholstered in light grey or soft pink, with stainless steel legs polished in a golden finish. It measures 95 inches (241 centimetres) wide and 38 inches (96.5 centimetres) deep.

The sofa can be paired with an off-white coffee table constructed from cement, sand and fibreglass with a lacquer finish.

A second couch in the collection is the low-back Quattro sectional, comprising a series of box-like upholstered forms made of high-resiliency, soy-based foam and fibre.

Other pieces with modernist influences are a credenza and a bench with bolster pillows. 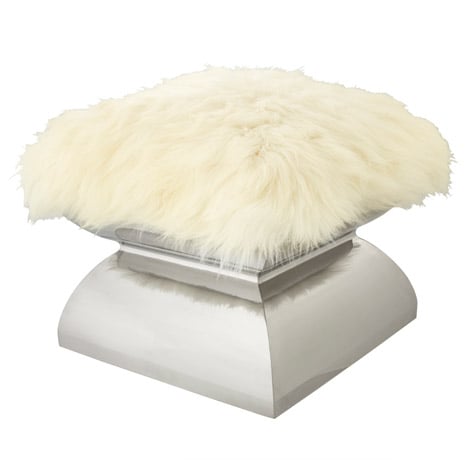 The Mod credenza has a wood frame with a hi-gloss white lacquer and is designed for music-lovers: circular cloth cut-outs conceal speakers without damping the sound.

Meanwhile, the bench is shaped like those used during psychiatric consultations in the mid-20th century.

"We call this the La Strizza bench, which translates to 'the shrink bench,' because if it were 1955 and you were getting analysed at the psychiatrist, this is what you'd be lying on," said Paltrow.

Aside from modernist and Italian influences, two pieces are named after residential areas of London, where Paltrow once lived with her ex-husband Chris Martin of Coldplay.

Belsize wooden stools feature natural, unfinished acacia wood with brass details, and can double as coffee tables. Pimlico is a tall cabinet with five steel shelves that have a gold polish finish.

Paltrow has starred in countless Hollywood blockbusters and won an Academy Award for her performance in 1998 romantic drama Shakespeare in Love.

She launched Goop in September 2008 in Santa Monica, California, focussing on wellness and issues around women's health, as well as fashion, travel and design. It is reportedly now worth $250 million.

CB2 was created as an offshoot of Crate & Barrel in 2000, and has since worked on several collaborations with figures across the creative industries. In 2015, the brand launched a range of furniture pieces by musician Lenny Kravitz that drew influences from the 1970s.

A handful of celebrities have tried their hand at furniture design, with varying degrees of success. They include Brad Pitt, Pharrell Williams, Vanilla Ice, and even Buzz Aldrin.

Photography is courtesy of CB2.