Vespa has revealed a monochrome version of its classic Sprint scooter designed by musician Justin Bieber that is surrounded by a ring of icy white flames to give it a "Justin spin".

Save for a few functional elements such as the kickstand, tyres and taillights, every detail of the Justin Bieber X Vespa scooter is finished in the same neutral white hue.

This also includes a collection of driving accessories – a helmet, bag and gloves – which the singer designed to match the vehicle.

"Monochromatic things to me are very palatable," Bieber said. "And the flames were a way to give it a little bit of an edge."

"When I'm designing, I'm always thinking about: is this pushing things forward? Is this unique? Is this something that is trendsetting?"

The singer's name is emblazoned on the chassis in a graffiti-style font, set against a backdrop of tonal white and grey flames reminiscent of 90s Hotwheels graphics.

This same detailing, which Vespa calls Bieber's "Justin spin", is also found on the matching helmet.

Otherwise, the scooter retains many of the Sprint's original features, including its distinctive rectangular headlights and seven-spoke wheels, paired with a 50, 125 or 150 cubic centimetre (cc) engine.

In this way, the design stays true to Vespa's iconic silhouette, which Bieber says he first encountered "somewhere in Europe". 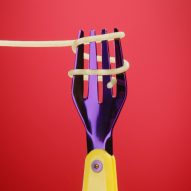 "I just remember seeing a Vespa and being like 'I want to ride one of those'," he recalled.

"The first time I rode a Vespa was somewhere in Europe, probably either London or Paris," he continued. "And I had such a great time, just the wind flying through my hair, the freedom. It was fun."

Vespa introduced the collaboration via a video

Although Bieber is primarily known for his music, this isn't the singer's first venture into the world of design.

He launched his own clothing line Drew House in 2019, which has since released limited edition shoes in collaboration with Crocs as well as designing uniforms for the Toronto hockey team the Maple Leafs. Pharrell Williams turns to architecture with United Residences in Toronto

"Being able to express myself, whether it's through art, music, visuals or aesthetics, being able to create something from nothing – it's a part of me," he said. "Ultimately the goal in creating and designing is always to put your own unique spin on things."

A number of other musicians have tried their hand at design in recent years.

Among them are Kanye West with his fashion brand Yeezy, Rihanna with her lingerie line Savage X Fenty and Pharrell Williams, who has created everything from chairs and trainers to an entire two-tower residential block in Toronto.