Tala co-founder Joshua Ward sets out his company's mission to be commercially successful while having a positive impact on the environment in this movie Dezeen produced for the London lighting brand.

Tala is a British lighting brand based on Vyner Street in east London. Founded in 2013, the company specialises in low-energy LED lighting products that recreate the warm glow of traditional incandescent bulbs.

"Tala was founded by myself, Maxwell Wood and William Symington while we were studying at the University of Edinburgh in 2013," Ward explains in the movie, which Dezeen filmed for Tala at the brand's recently opened Tala Studios in London.

"We are focused on the idea that good design can help mitigate climate change."

Ward says that Tala's ultimate goal is to "prove the model that you can be commercially successful whilst being net positive for the environment," which the company has set out to achieve in a number of ways.

By recreating the look and feel of a traditional bulb, Tala aims to encourage people to switch over to energy-efficient LED lighting. Tala's light bulbs use up to 90 per cent less energy than an equivalent incandescent bulb and will last 10 to 15 times longer before needing to be replaced.

"At Tala, we describe our approach to sustainability as: 'conservation through beauty'," explains Tala sustainability manager Nikki Kapp in the film.

"We help our customers buy into sustainability by allowing them to buy a product that is beautiful and attractive in and of it itself, rather than just because it's a sustainable product."

Tala currently produces and sells a range of different light bulbs and fixtures.

Its first range, which it now sells as the Classic Collection, replicates the look of traditional incandescent bulbs and can be used in any regular lamp.

The Feature Collection includes oversized versions of these designs.

But the brand has also designed and developed number of more elaborate, decorative light bulbs.

"Being LED, the bulbs last 10 to 15 times longer [than incandescent bulbs], so they're no longer disposable items," says Tala's design director Joe Armitage.

"That means it warrants putting design effort into them and creating them as features in their own right."

The Porcelain Collection features simple, geometric forms with a matt, opal finish that mimics that of porcelain, while the Voronoi Collection features huge, sculptural, mouth-blown glass bulbs, which are intended to recall the tessellating patterns seen in overlapping forest canopies. 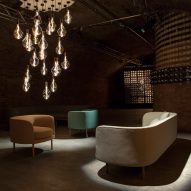 The brand's latest lights, called Basalt, feature extruded hexagonal forms, based on the distinctive basalt columns that make up the Giant's Causeway in Northern Island.

"For the more decorative products, we look at the environment around us for inspiration," Armitage explains. "So nature is a huge inspiration for us."

In addition to producing low-energy light bulbs, Tala aims to offset the carbon emissions the company generates by donating a percentage of its revenue to reforestation programmes around the world.

"Our goal is really to scale the low carbon economy by supporting forest restoration," Kapp explains. "To date we've contributed to planting just over 40,000 trees."

Tala's growth has been rapid – the company currently employs over 50 people, and its light bulbs can be found in leading design stores across Europe and North America, as well as myriad bars, restaurants and hotels around the world for clients including Soho House and The Hoxton hotels.

The company also works with a number of leading lighting designers and design studios, such as Lindsey Adelman, Tom Raffield and Apparatus, to help them transition to LED technology.

Ward believes that the brand's success so far is a direct result of its focus on sustainability.

"I think we've been successful to date because we've found an audience that are looking for a brand and a product to help them make that transition to sustainable lightning that is design-led," he says.

"We've still got a long way to go, and I think as a young company it's about proving the model that you can be commercially successful whilst being net positive for the environment. I think if we were to prove that, then we would be very happy."

This movie was filmed by Dezeen in London for Tala. All photography used in this story is courtesy of Tala.