British lighting brand Tala has designed its "super simple" Alumina range with urban nomads in mind, in a bid to appeal to a more transient rental market.

Comprised of a plug-in pendant and a table lamp, Tala's latest collection is manufactured from alumina – a high-grade technical ceramic base typically used in industrial applications.

This material grants the lights their matte white finish, which is complemented by a minimal, pared-back design. While the table lamp is simply formed of a bulb, stand and a tuner, the plug-in pendant consists of just a node and a bulb.

The simple componentry and "plug and play" design caters to the growing rental market, allowing users to easily install and reinstall the lights without the need for an electrician.

"Alumina was the natural choice of material for this new range, which we designed to be versatile and sustainable, and allow for easy-installation desired by today's urban nomads," he added.

As a substance that is used as a starting material for the smelting of aluminium metal, alumina is highly durable in addition to being cheap to manufacture.

This aligns with Tala's aim to design products that are both affordable and "built to last", making the range suitable for "life on the move". 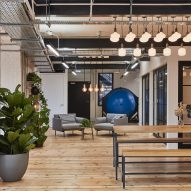 "A lot of people we've spoken to over the last few years have really admired the Tala products, the brand, and so on, and they really wanted to get involved in what we were doing," fellow co-founder William Symington told Dezeen.

When people are renting and moving from house to house, Symington explained, the process of having to remove elements such as light fixtures that have been hardwired into the ceiling is seen as a barrier, and often prevents people from buying a nice piece of design for their home.

"So what we've done here is created something super simple that plugs into the wall, or secures with two screws into the wall and two further screws for the nodes into the ceiling, so that people can have accessibility to a nice little piece of design in their home," he added.

"And to bring them down, it's just as simple as unscrewing them, packing them up in a box, and taking them to the to the next place – with a tiny bit of Polyfilla in between."

The Alumina designs have been released alongside Tala's new dim-to-warm light sources, called Sphere and Light Engine, which aim to use light to benefit users' wellbeing.

Each light source is fitted with state-of-the-art "circadian" driver technology that allows the colour temperature and ambience to dim from cool to warm, in accordance with the human body clock.

This means the bulbs can be dimmed to mimic natural light sources, ensuring users aren't kept awake at night by the after-effects of white light.

"The Sphere and Light Engine ranges are an expression of our research and interest in the link between wellness and lighting," explained Ward.

"Whilst there is nothing better than natural sunlight, we wanted to advance the conversation on artificial circadian lighting and provide solutions that improve our quality of life."

The Alumina, Sphere and Light Engine ranges were released during this year's Milan design week, which took place from 9 to 14 April.

Elsewhere in the city, Mario Tsai presented a modular lighting collection made from bending sheets of flexible steel, and Dimore Gallery installed seven pieces of furniture by the late artist Gabriella Crespi among piles of sand. 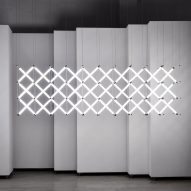