A resting bear, a curled up cat and a pair of sleeping birds are all part of Vitra's new Resting Animals series, designed by Swedish studio Front.

The collection of sleeping animals made in wool and ceramics is the result of a recent research project by Front founders Anna Lindgren and Sofia Lagerkvist, which explored the close connection between humans and figurative objects.

The largest animal in the series is a 3D knit-covered bear that can be used as a stool, ottoman or backrest. The smaller designs are decorative ceramic figures that include a cat and two birds in different sizes and colours.

"We spent four years developing this project," Lindgren told Dezeen. "Vitra asked us to come up with an idea for their range of accessories and it started with conversations about bringing a sense of nature to a room."

"Vitra's accessories collection has lots of strong individual products, which can really define the room and give it character," added Lagerkvist.

"We wanted to continue to look at that quality within a product; if an object can influence the mood in a room. We were inspired by the animal figures in the collection."

The design duo began by conducting a series of interviews with a group of randomly selected people who were asked to identify the most emotionally enriching and meaningful objects in their homes.

"We found that many fascinating stories were tied to the figurative objects they own," said Lindgren. 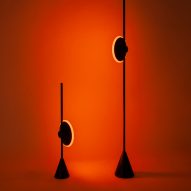 "When looking further into this, we came across studies showing how people looking at pets or soft toys get a positive sense of wellbeing with dopamine and oxytocin being released in the body, resulting in a feeling of calm," she continued.

"This has also been used in the treatment of patients suffering from depression. There's even a name for it – the 'cuteness effect'."

Following on from previous works by Front, which have made observations about how various animals sleep or hibernate, the designers decided to create a series of animals that function as decorative home accessories.

"We wanted to create a soft piece that also could stand the test of time. It is 3D form-knitted in one piece, which has been an amazing technology to work with," said the design duo.

"However it has taken a long time to develop – lots of trial and error. We have used four different colours of thread to create a texture and a variation in the colour."

"We wanted to work with different materials in the collection to achieve a difference in expression and tactility. Ceramic is also a good material to work with for variations and depths of colours."

The collection will be launched during Maison&Objet in Paris, which takes place from 7 to 11 September 2018.

Front has a long history of creating furniture in the form of animals. In 2006, the Swedish studio created its renowned range of lifesize animal products for Dutch design brand Moooi.

Pieces included a pig-shaped side table and full scale models of a horse and a rabbit with lamps on their heads. In an exclusive movie filmed by Dezeen ten year's after the collection's release, the designers discuss the unexpected reaction that the animal-themed range received.