The Stockholm Centre Party commissioned the Stockholm-based studio to masterplan a sustainable district for the city in Sweden. Anders Berensson Architects has previously created proposals for a wooden skyscraper covered in numbers, and a high-density housing district connected by aerial walkways, for the political party.

"Wood is the building material that releases the least carbon dioxide in today's construction industry and is therefore the obvious choice to build a new Swedish city area in," the architect explained in its statement.

Constructed from cross-laminated timber (CLT), the 31 towers would rise above the development as self-contained city blocks containing 3,000 homes and 30 restaurants.

At street level the development would comprise 19 blocks of between six and 10 floors, with more homes as well as 60,000 square metres of office space and 90 shops and restaurants. 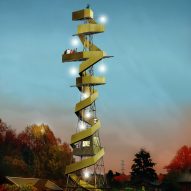 Anders Berensson Architects' proposal covers the roofs of all the lower blocks with public parks and connects them with bridges, with the aim of creating a new area for Stockholm's residents to stroll through.

As the Masthamnen district is situated in a valley, those approaching the development would be doing so from the same height as the roof parks and raised walkways, which would connect to trails through the surrounding hills.

A pedestrian and cycle bridge would connect the development from the east, and an existing ferry terminal would be kept in place, with some adjustments.

With it's sustainable credentials and flexible design applications, architects around the world are experimenting with the potential of CLT. Canadian studio Michael Green Architecture has plans for a massive office complex made from CLT on a waterfront in New Jersey, and Penda has mooted designs for a timber high rise planted with trees for Toronto.