Jury members for Dezeen and Samsung's Ambient Mode design competition explain why they awarded top prize to a responsive fish mobile, in this movie Dezeen filmed for Samsung in Berlin.

The design is a digital mobile made up of gently moving fish, which reacts to changing ambient light conditions and movement in the room.

The winner was selected but a jury comprising designers Neville Brody and Erwan Bouroullec, Dontae Lee, head of the design centre at Samsung Electronics, and Dezeen's editorial director Amy Frearson.

Brody and Bouroullec praised the design for it's simplicity and attention to detail.

"It's present but not present – it's got sort of an invisible touch," Brody says in the movie, which Dezeen filmed at the IFA 2018 consumer electronics show in Berlin.

Bouroullec adds: "With tiny details, sometimes you can really go somewhere else." 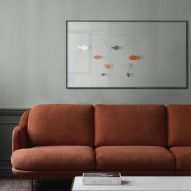 "I like the winning project very much because it [makes the television] more of a lifestyle object, rather than a technology object," he says.

"There's kind of an emotional approach [to the design], which Samsung also tries to deliver."

The contest asked entrants to create a visual experience for the new Ambient Mode on Samsung's QLED televisions.

The feature allows a television to blend into its environment when not in use by mimicking the look of the wall behind it. Other graphic elements or information can then be overlaid.

"Our design is a digital, kinetic sculpture that responds to the environment," says Cockerill.

"The concept takes advantage of the sensors within the Samsung QLED TVs. If the light starts to increase, the fishes' movements will start to accelerate and the colour of the fish will change. If someone's presence is detected, it will trigger delightful little animations."

The design is based on a 1950s decorative mobile made by Danish designer Christian Flensted. 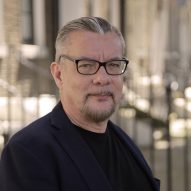 "I actually bought the mobile when my son was born and it hung above his crib when he was a little baby," Cockerill explains.

"That really inspired us to think – could we take something that is physical and actually move it into the digital realm and enhance it?"

Kinetic Decor saw off competition from four other shortlisted designs, all of which were displayed as part of Samsung's stand at IFA 2018, Europe's largest consumer electronics trade show.

Bird Clock by Jianshi Wu and Yitan Sun visualises the time via a graphic depiction of birds sitting on wires.

Gerard Puxhe created a design called Architectural Extension, which creates the illusion of an extension of the room the television is placed in, which the user can customise in different ways.

Alex Warr and Zach Walters created a design called TimeFrame, which creates the illusion of an aperture in the wall and it changes shape depending on the time.

Sphere by Duhan Ölmez and Irem Deniz Akçam of Doisign showcases layers of information on the TV screen, visualising them in the form of a globe.

In addition to winning €8,000 in prize money, Swift Creatives now also has the opportunity to commercialise its idea with Samsung.

"Any designer loves to see their ideas come to life, so its been great to see the designs here at IFA," Cockerill says.

"We look forward to working with Samsung to see how we can develop this to hopefully get it into Samsung's televisions around the world."

This movie was filmed by Dezeen at IFA 2018 in Berlin for Samsung.