Secret 7" has invited 10 artists to decorate one-off turntables for the Planar 1/1 exhibition and online auction, with the proceeds going to mental health charity Mind.

Each of the 10 artists was given a plain white Rega Planar 1 turntable and given free reign to use it as a blank canvas on which to create.

The turntable collection is the final part of this year's Secret 7" project, which aims to bring together music and art by inviting 700 creatives each year to decorate the sleeves of vinyls with unique artwork.

The project has been running since 2012, with the vinyl covers exhibited anonymously and then auctioned off for charity. The money raised from this special edition Planar 1/1 auction will be donated to mental health charity Mind.

Now in its seventh year, Secret 7" has produced 3500 record sleeves for 35 different tracks.

Each is sold anonymously, with the artist only revealed after the sale. Planar 1/1 operates differently, with artists credited from the beginning of the auction.

French graphic designer and illustrator Jean Jullien, who previously design a record sleeve for Secret 7", used acrylic paint to create a typically playful animation of a character who appears to smoke the arm of the record player like a pipe when it moves.

Turner prize-winning artist Jeremy Deller incorporated Neolithic arrowheads to the plinth of his turntable, while Gavin Turk referenced his iconic Cave piece, and turned his turntable into a blue heritage plaque.

Mind ambassador Stuart Semple's turntable is a nod to Joy Division's artwork and music, with lyrics from Disorder running around the cover.

"A lot of my work is inspired by song lyrics and music, I sort of figured I may never get the chance to work on a record player again so I wanted to work with the most iconic I could think of," said Semple.

"I very much wanted to enhance the kinetic nature of the piece to I worked on a piece of graphics for the turntable itself that once it spins creates an interesting effect."

Welsh artist Pete Fowler, known for his work on the album covers for the band Super Furry Animals, used enamel paint to create a black and white scene featuring an owl character. 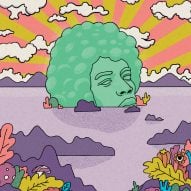 "I went for a sinister supernatural tropical owl tableaux, which for some reason I thought appropriate and requires a record to be placed on the platter for the piece to be completed," said Fowler. "I may have been listening to Circle or some other cosmic boogie."

Hsiao-Chi Tsai & Kimiya Yoshikawa chose to paint their turntable in bright colours, while Francis Richardson created a design with curved designs in pin, blue and brown.

To complete the collection James Joyce decorated his turntable with smiley faces and Jake and Dinos Chapman placed a hand-coloured etching on top of their turntable.

The full set of turntables is on display at London's Ace Hotel until 12 September when the auction ends.