Now in its sixth year, the Secret 7"  project invites over 700 creatives to design one-of-a-kind record sleeves for a renowned track. But the identity of each piece is kept secret, so it is impossible to know who designed each one.

Each year, the organisers choose a track from seven world-renowned musicians. They produce 100 copies of each track on seven-inch vinyl, resulting in a total of 700 individual records.

These are distributed among the 700 participating artists and designers, who create their own artistic interpretation of the song.

The resulting artworks are displayed in an exhibition, before being sold off on a first-come-first-served basis for charity.

Visitors to the exhibition are not only left guessing which designer is behind each sleeve, they also have to work out what track each record contains.

Once the records are paid for, the author of the artwork is revealed, while any remaining sleeves are auctioned off via the chosen charity's eBay page.

The musical selections that inspired these creatives' works include Jeff Buckley's Lover, You Should’ve Come Over, Castles Made of Sand by Jimi Hendrix, I Saved The World Today by Eurythmics and I’m Not Down by The Clash.

Other chosen tracks are No Surface All Feeling by Manic Street Preachers, Help by London Grammar and Damaged by Primal Scream.

Project founder Kevin King told Dezeen how a visit to the Royal College of Art's postcard sale, RCA Secret – a fundraising exhibition that sells original postcard-sized artworks by students and graduates, as well as acclaimed artists, illustrators and designers – inspired him to establish the Secret 7" project six years ago.

"I was working at a record label when I had the idea for Secret 7"," said King. "The company was doing various fundraising for it's charity of the year through things like cake sales, quizzes, fun runs and a painful Three Peaks Challenge. A visit to the RCA postcard sale inspired me in two ways." 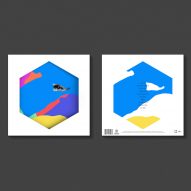 Cover for new Beck album Colors is designed to be customised

"First I thought translating the project into records would be a simple way to involve the label's music and musicians into our fundraising. Second, having been reduced to a mere spectator at many corporate auctions, the first-come-first-served secret sale approach really appealed to me," he continued.

"I love that the project is accessible to many; whether through designing the sleeves or buying the records."

The 700 unique records will be showcased at The Jetty on Greenwich Peninsula, London, from 8 to 23 June 2018. They go on sale on 24 June, the day after the exhibition closes, at a set price of £50. All proceeds from the sale will go to mental health charity Mind.

"In the UK one in four people experience a mental health problem every year, and it's the single biggest killer in men under 45. There has been a great increase in conversation about mental health recently, and we want to do our bit to keep that going, as it feels like the key to change," King told Dezeen.

Similarly, last year saw design writer Max Fraser and publicist Aynsley Munsie organise an exhibition of one-off artworks created by a mix of established and emerging designers, which were auctioned anonymously for Joy of Living, an initiative raising money for Maggie's Centres.