The British designer expressed her delight at a survey conducted by the British Fashion Council, which found that none of the designers on the official line-up would be using fur in their collections at this month's fashion week. London Fashion Week takes place between 14 and 18 September.

"Hearing about the fur-free fashion week fills me with hope that fashion can be cruelty-free one day and reminds me that the city of London is still punk rock and has its finger on the future of fashion," McCartney told Dezeen.

"This is what the next generation demand and London has heard it loud and clear. Thank you, London Fashion Week, for showing others this is the way forward in fashion," she continued.

This will be the first time in the biannual event's 35-year history that all participating designers will show fur-free collections.

The number of anti-fur protesters at London Fashion Week has risen from 25 in 2016 to 250 last year. Earlier this year, a protester stormed the runway of Greek designer Mary Katrantzou during her AW18 show in London to protest her use of fur – a claim that she later denied. 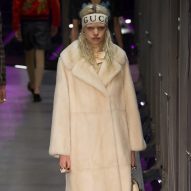 Caroline Rush, chief executive of the British Fashion Council told the Guardian that the announcement "highlights a trend we have seen over the past few years, with more and more brands deciding to use alternative materials to fur".

"The British Fashion Council supports the creativity of designers and keeps an open dialogue with the industry, from designers to media, retailers, business leaders, government and global brands while encouraging designers to make ethical choices when it comes to their selection of materials and supply chain," read an official statement.

An increasing number of designers are making moves to sustainable, cruelty-free design. Earlier this month, Stella McCartney teamed up with Adidas on a leather-free, vegan edition of its classic Stan Smith shoe.