All 26 letters of the alphabet are constructed out of folded metal in this colourful, interactive installation for London Design Festival 2018.

London-based graphic-design studio Kellenberger-White has created a human-scale typography in Finsbury Avenue Square, Broadgate, which encourages visitors to play as well as sit.

Each of the moveable Alphabet chairs is painted a different colour, transforming the square into an interactive rainbow-coloured playground.

"Alphabet is an experiment in construction and colour that tests and connects many things," said the designers. "It's a playground, but also an alphabet; it's public furniture, but it can talk."

The typographic form of each chair is based on the shapes that are possible to make from folded metal. There are also intended to reference the photos in Bruno Munari's 1944 series Seeking Comfort in an Uncomfortable Chair, which show a figure sitting in a number of unusual positions. 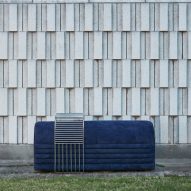 Visitors face the challenge of getting comfortable in each of the pieces, as well as the opportunity to spell out giant words.

Each of the Alphabet chairs is painted a difference colour with a specialist paint used for industrial metal work.

Alphabet is one of this year's Landmark Projects, a series of major installations by the world's best designers, artists and architects, commissioned by British Land.

The projects, which have been part of London Design Festival since 2007, have appeared in some of London's best-known spaces including the Tate Modern, the V&A, and St Paul's Cathedral.

Other Landmark Projects for 2018 include Scholten & Baijings' Time for Tea at Fortnum & Mason, Waugh Thistleton Architects’ MultiPly at the V&A and Es Devlin's poetry-spouting lion in Trafalgar Square.