Blush-tone walls and rose-hued marble feature in this Melbourne accessories shop, designed by studio Pattern to suggest a "new kind of femininity".

Pattern – which is headed up by Australian designers Lily Goodwin and Josh Cain – were given free reign on this branch of The Daily Edited (TDE), which is located in the southeast Merbourne suburb of Malvern East.

The pair immediately decided to employ shades of pink, TDE's signature colour, throughout the 60 square-metre space.

"[It was] an exciting challenge to use this colour to create a sense of a new kind of femininity; one which reflects the qualities of a modern woman," Goodwin told Dezeen.

"While pink is undoubtedly the hero, the aesthetic leans toward a refined kind of grown up-cool."

A curved, blush-coloured partition wraps the white-painted structural walls of the space, punctuated by an arched opening that leads to a rear storage area.

Display counters are topped with large slabs of Norwegian rose marble in attempt to "suggest a sense of complexity and depth".

Any pre-existing decorative elements were removed to allow a handful of fixtures, such as the globular pendant lamps and gridded shelving unit, to act as focal points. LED strip lighting is installed above display nooks and behind the partition wall, to give the store a slightly futuristic feel. 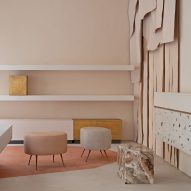 As well as introducing new poured-terrazzo floors, the designers added a large panel of glass at the front of the store, to make it seem more open and inviting to passersby.

TDE has several stores across Australia, including two other branches in Melbourne, and more in Sydney, Brisbane and Adelaide.

Pattern previously worked with the brand on its store in Sydney's Westfield shopping centre.

"As a studio we had a solid understanding of this fairly young brand's identity, but we were also mindful that perhaps this was an opportunity for evolution, to present the brand in a new light," added Goodwin.

Pink continues to be a popular colour of choice for retail spaces.

High-end fashion label Acne applied the shade to the ceiling of its Milan outpost, while architect India Mahdavi added bubblegum-coloured panels to a RED Valentino boutique in London.

Photography is by Sean Fennessey.