Daan Roosegaarde, Lee Broom and Henrik Vibskov were among the architects and designers that joined Dezeen at the Delta Light showroom in London last week for a party to celebrate the shortlists for Dezeen Awards.

The Dezeen Awards shortlist party took place on 13 September 2018, to celebrate the 126 projects and 33 studios vying for accolades in our inaugural awards.

Heatherwick Studio, MAP and Studio MK27 all attended to celebrate the architecture, interiors and design projects that have been shortlisted, along with Je Ahn of Studio Weave, who was one of this year's 75 judges.

As well as Lee Broom, Atelier NL's Lonny van Ryswyck joined to celebrate being shortlisted for designer of the year, while Copenhagen studio COBE flew in following its nomination for architect of the year. 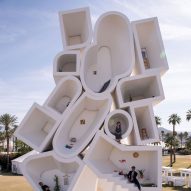 Other attendees included Erez Nevi Pana and Kosuke Araki, who are both vying to be named emerging designer of the year. They were joined by Spacon & X founders Svend Jacob Pedersen and Nikoline Dyrup Carlsen, OHLAB founders Jaime Oliver and Paloma Hernaiz, and the Joyce Wang Studio team, who are all up for the emerging interior designer of the year award.

Winners of all 33 categories will be announced at an exclusive ceremony in London on 27 November.

Photography is by Thomas Brooker.

Find out more at www.dezeen.com/awards