Neumann Monson Architects has designed a municipal services building for the city of Des Moines, to consolidate its various departments and facilitate collaboration.

The 105,000-square-foot (9,755-square-metre) office building is the first phase of a larger masterplan to create a new civic services hub for Des Moines, the capital and most populated city in the US state of Iowa.

A central principle of the scheme was sharing spaces between different departments to reduce waste. "The City of Des Moines sought efficiencies through shared-use spaces, shared staffing, and better working environments," said a statement from Neumann Monson Architects, which is based locally.

The project is sited at a crossroads of highways and train tracks, in a former industrial neighbourhood.

Two programme types are combined within the building. An offices volume occupies the western side, facing the front entrance, while a much larger service volume takes up the rest of the plan. This portion has direct access to a service entrance for the city's large vehicles.

Neumann Monson wanted to separate these different types of spaces, yet maintain a relationship between them. They did so by creating an enclosed courtyard between the two, which is shared by all the building's users. 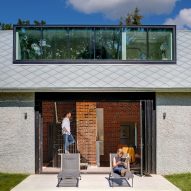 As well as a place for social interaction, the courtyard also brings natural light to the centre of the building's expansive floor plan.

A minimalist facade is made of pre-cast concrete panels that run along the service areas and alternate with tall, thin windows to avoid excessive sun exposure.

In the office spaces, a curtain wall brings more natural light to the open-plan desk area. According to the architects, 95 per cent of workspaces have access to an operable window.

The Des Moines Municipal Service Center achieved LEED Silver designation, thanks to sustainable features like water run-off control, and the use of local and recycled materials.

Neumann Monson has completed several projects in and around Des Moines, including a conversion of a historic warehouse into offices and a farm building refurbished as a family home.

Photography is by Cameron Campbell.