Trevelyan, who runs London-based Studio Trevelyan, came up with the concept for the Fuse benches when walking along the coastline in his native Australia. He spotted "surf-rounded pebbles that had fractured off from the larger outcrops" and envisioned assembling them together.

"The concept that formed was the theoretical exercise of picking up a handful of these stones and then crushing them together in your hands such that they fuse into a singular sculptural form," Trevelyan told Dezeen.

The benches are made from Hotavlje stone sourced from a quarry in Slovenia – which turned out to be located just 50 metres from the stoneworks where the pieces were produced.

A large chunk of the material was sliced into thick slabs and refined into pebble shapes with a mix of computer numerically controlled (CNC) cutting and hand-finishing. Cutouts were left in the individual segments so that they slot back together, creating the two different sized benches.

Contrasting these chunky designs are delicate bronze tables and lamps, which also feature in the exhibit at the Carpenters Workshop Gallery in New York – Trevelyan's first solo show in the US.

Spindly and knobbly legs allude to natural forms – although less explicitly than the marble designs – and form coils around some of the standing and table lights. Other lampshades are cupped, while tables are topped with slender pieces on metalwork. 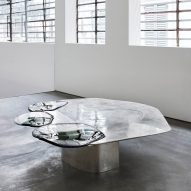 "The forms have many different resonances with natural forms," said Trevelyan. "Tree branches and roots, skeletal-like forms, and sculpted musculature are all present to a certain extent. But my desire with the work was to do so in a way that results in a degree of ambiguity in the final form that allows the viewer to draw their references."

In keeping with the aesthetic, the designs are cast in either patinated bronze or gilded bronze that is marked to look like rough texture. In earlier experiments, Trevelyan used sand-cast aluminium that was is powder-coated white, but dropped this in favour of a weathered look.

"Bronze also provides the opportunity to experiment with patinas to subtly alter the character of the works and give them a very tactile, and over the long term, mutable finish that responds to both the environment and the usage of the piece over time," he said.

In the gallery, the resulting mix of white, black, golden and silver are complemented by walls coloured in blocks of dark blue and pink.

Placed in front of a pink-hued backdrop at the entrance to the exhibition is a timber and fibreglass lamp. It comprises two angular legs that appear to kiss, with a flat shade at the top, and is covered in several layers of a Jesmonite and graphite mix.

Trevelyan's more recent material experiments include a collection of tables called Composite II. In each, individual oak chair legs are fixed together with colourful, triangular resin blocks, and topped with a piece of circular resin.

"The resin pieces start with between three and five loose pieces of timber that are placed into moulds into which the resin is cast," said the designed. "Each resin element is cast separately, gradually fusing the timber elements together and forming both the joints and tabletops."