The Italian designer, who has created costumes for Björk, Rihanna and Erykah Badu, based her collection on natural formations, which she translated into liquid metal materials and structural silhouettes.

"I want to find a way to portray beauty that is not constructed and artificial but rather casual, with the same type of randomness nature creates itself," Ragni told Dezeen.

Inspired by the works of artists John Chamberlain and Jon Rafman – who are recognised for their plastic and metal sculptural works – models were dressed in black PVC trench coats and loose-fitting yet structured iridescent fabrics, intended to resemble objects rather than garments.

"For this collection, I used fabrics that look like liquid metals, crushed paper, plastic packaging and see-through coloured ice," she said. "I have been told many times that my clothes resemble trash bags, but I quite like that!" 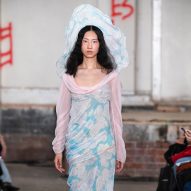 Another point of reference was the concept of hyper-femininity. "I was inspired by archetypical female figures and what a woman with a strong sense of self would like to wear," she explained.

Ragni's collection was presented in the basement of London's 180 Strand, a low-ceilinged warehouse space with steel fixtures and concrete floors.

When describing the setting for the show, Ragni wanted the space to resemble a museum installation rather than a fashion display to emphasise the "sculptural nature of her work".

Working with set designer Derek Hardie Martin, Ragni cited the work of director David Lynch and his "dreamlike movies", which she referenced with a video projection of abstracted visuals by artist Joseph Delaney.

Having founded her label in 2014, Ragni has created garments for a number of musicians, including Björk on her "magically utopian" Utopia tour earlier this year.

"I would like that, by wearing this collection, a person can feel ready to face a social context, approach this weirdness in a positive way and feel that they can own the moment and their audience," said Ragni.

London Fashion Week ran from 14 to 18 September at various locations around the capital. Other shows included the Fashion East show in Covent Garden, which presented work by Charlotte Knowles, Yuhan Wang and ASAI.

Photography is by Jordan Eisbjerg and Eva Losada