Danish architecture studio 3XN has won a competition to design an educational climate centre on the waterfront in Lemvig, on the west coast of Denmark.

The Climatorium will serve as an educational resource centre on the challenges posed by urbanisation and climate change for Lemvig – a coastal city that faces an increased risk of flooding from rising sea levels.

"We have aimed to create a building that tells a story about climate," explained Jan Ammundsen, senior partner and head of design at 3XN.

"The building has a rectilinear, stringent expression but forms a wave shape that lends a distinct and easily understood identity. The wave tells the story of the site and also refers to the serious challenges we face as a result of climate change."

This "wavy organic pocket" carved into the facade, and clad in light wood, will create a sheltered entrance for visitors and a stepped outside area for people to sit. On the inside the wave shape is expressed in a form similar to the ribbed hull of a boat, in reference to the local North Sea fishing industry.

Wood, concrete and steel were chosen for their raw aesthetic. A wraparound glass facade for the Climatorium's first floor will connect the interior to the waterfront surroundings and give the timber-covered first floor the appearance of sailing above it.

The lower floor will host exhibitions, conferences, concerts and events where local people and visitors can come learn about climate change. A cafe will also be located here, creating an informal gathering place. Researchers and companies focusing on climate change will be based on the first floor, sharing meeting rooms and common areas. 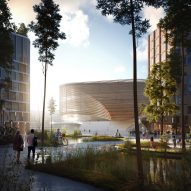 Set on Lemvig's harbour, the Climatorium will be surrounded by a landscaped area called the Climate Wedge. This undulating area's topography will mirror isobars – lines of pressure on weather maps – that chart the city's climate. Its shape will create a path to the building and mesh nicely with the skate park next door.

Plants chosen for their ability to thrive in the coastal climate will dot the Climate Wedge, which will also provide a platform for experiments conducted by researchers based in the Climatorium.

Urban development consultancy SLA and technical advisory services company Orbicon were collaborators on the project, which is due to complete in 2020.

Copenhagen-based 3XN recently revealed early designs for a new arena for Bergen in Norway, and is currently building an aquatic centre in southern Sweden wrapped in another wave-like facade.

Further down the Danish coast in Ribe, Dorte Mandrup has added a thatched extension to the Wadden Sea Centre, creating new exhibition spaces for visitors to the protected UNESCO World Heritage Site.