Danish architecture practice 3XN has completed a blocky office building and hotel in the suburbs of Paris, with "distinct but complementary" faceted checkerboard facades of bronze-coloured and reflective aluminium.

The first project completed in France by 3XN, the InDéfense office and Hôtel OKKO stand side-by-side between a railway and road in the Les Groues district of Nanterre, overlooking the La Défense business district.

Connected along one of their edges to form a long section of street front, the two buildings were designed with a similar formal and material language, intended to create a strong visual symbol for the busy district.

“As the first shape you encounter when arriving from La Défense, this building had to be eye-catching and dynamic,” said 3XN founding partner Kim Herforth Nielsen.

“The faceted facade and shifting volumes make it a standout in the busy district. The concept – two distinct but complementary designs – is unique in the area,” he continued.

Where the two buildings meet, a sheltered cut-out beneath the office building connects the front and rear of the site, with a black spiral staircase rising up into the building.

While the hotel is organised in an L-shaped form that turns the street corner, the office is more elongated, split into several block-like forms that have been "pushed and pulled" to create a feeling of depth as well as small terraces for the upper levels.

"Where Hôtel OKKO, clad in semi-reflective aluminium panels, remains an unbroken mass, the InDéfense office building is split and shifted into smaller masses, each pushed in or extruded to open the long and narrow site to its surroundings," explained the practice. 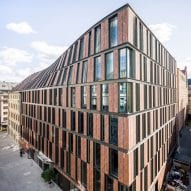 "The reflective facade of the Hôtel OKKO sticks out of the context and gives the program its own identity, while the distinctive copper-coloured facade of the InDéfense building brings warmth and atmosphere in the neighbourhood," it continued.

Inside, the office is organised around a central glazed atrium, with a restaurant at street level and a large spiral staircase connecting each floor with shared landings designed to encourage social interaction between workspaces.

"The visual transparency of the open atrium spaces allows for easy visual access across the building, facilitating knowledge sharing," said the practice.

"Visible from the exterior on the north facade, the spiral staircase that links the floors echoes its exterior twin and highlights the complementary architectural nature of the project," it continued.

The hotel contains 184 rooms over nine floors, with an additional public restaurant on the ground floor and shared amenities including a large lounge for guests on the first floor, with interior design by Studio Catoir.

Other projects recently completed by 3XN include a timber campus for a university in Switzerland designed in collaboration with Itten+Brechbühl, and a brick-clad office building in Stockholm that links to a renovated 19th-century building.

The photography is by Jared Chulski.