British set designer Es Devlin has been chosen to create the UK Pavilion at the Dubai Expo 2020, with a performative structure that will use artificial intelligence to write poems.

Called the Poem Pavilion, the structure will be the first UK Pavilion created by a female designer. It will feature an illuminated "message to space" made up of numerous AI-generated poems, which the Expo's anticipated 25 million visitors will be invited to contribute to.

The 20-metre-high, cone-shaped pavilion will be made up of rows of protruding slats that extend outwards from one central point to form a circular facade. Poems lit up in LEDs will scroll across the facade.

With poetry in Arabic, Chinese and French, as well as English, Devlin hopes that the pavilion will give visitors from all countries and cultures, a sense of unification.

"Poetry brings order to language, and machine-learning is a way to weave our voices together without prejudice while following the rhythms of centuries of poetic thought in a range of diverse cultures,"Devlin told Dezeen.

"The public debate around national identity is currently tending perilously towards the divisive and prosaic. I hope that the many millions who attend Expo 2020 and visit the UK Pavilion will feel a sense of the possibilities of the collective poetic."

Visitors will enter the building from below the cone through an illuminated Maze of Aspiration. Featuring augmented reality-enhanced exhibitions, the maze transforms the queue – which Expo visitors often complain about – into a virtue, using it to entertain and educate visitors while they explore Britain's advances in artificial intelligence and space technology.

Inside the pavilion is the Choral Space, which will be filled with a collective choral soundtrack, including choirs from every continent.

Formed of layers of CNC-cut cross laminated timber populated with LEDs, Devlin hopes the experience of entering this interior space will be like entering the resonating chamber of a wooden musical instrument.

According to the Devlin, the concept was inspired by one of physicist Stephen Hawking's final projects from 2015 called Breakthrough Message. This was a global competition that invited people to create digital messages that would represent humanity, if we ever encounter other advanced civilisations. 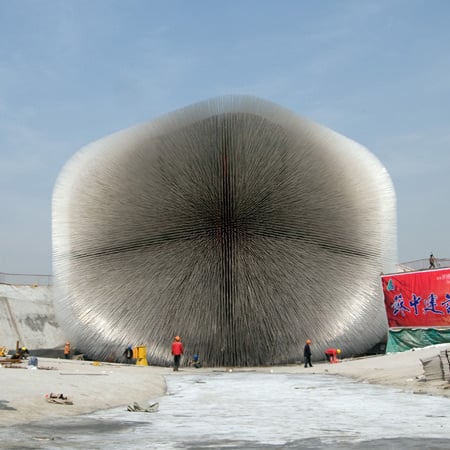 Designed to highlight Britain's "leading expertise in artificial intelligence and space", the Poem Pavilion will use machine learning technology to generate space-related words and phrases, amalgamating them with those contributed from visitors, to deliver a collective poetry display to passers by.

"What if the UK Pavilion at Expo 2020 becomes a place where visitors from all over the world take part in a collective global project that showcases British expertise in A.I. technologies and poetry while transcending national identities?" said Devlin.

"The UK has an unparalleled record in Expo design – from instigating the very first Expo in 1851 to the recent breathtaking pavilions of Thomas Heatherwick, Wolfgang Buttress, Asif Kahn and Brian Eno – it's a true honour to be invited to take part," she added.

This will be the first time since its inauguration that a female designer has been chosen to create the UK Pavilion, and Devlin will be leading a predominantly female team of experts in artificial intelligence and space technology.

"We urgently need to address the underrepresentation of women in science, technology, engineering, art and maths (STEAM) occupations," said Devlin.

"I've learned from my collaboration with the theoretical physicist Carlo Rovelli, that the evolution of scientific thought is often through the contribution of artists, musicians and philosophers as well as physicists." 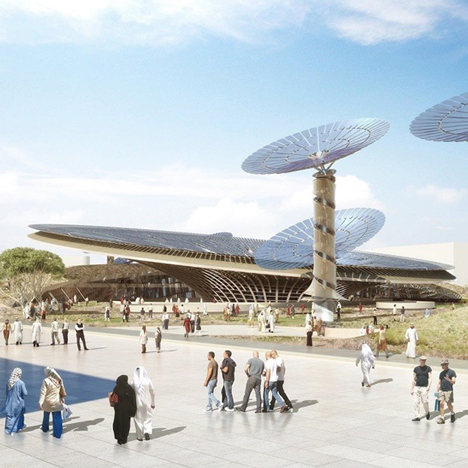 "My hope is that the fusion of architecture, poetry, music and science in this female-led project will attract and inspire girls and young women to investigate areas of science and technology that they might otherwise have felt weren’t for them," she continued.

The project will be produced by London and Dubai-based brand agency Avantgarde, while Manchester-based structural engineer Atelier One and sustainability engineer Atelier Ten will help to deliver the complex sculptural architecture of the pavilion, which aims to forefront innovative and sustainable building techniques and materials.

Devlin employed a similar technique with her fluorescent red lion sculpture that was recently installed in Trafalgar Square during London Design Festival. The open-mouthed lion featured an LED screen embedded in its mouth that spouted out lines of machine-generated poetry.