All three brands will now operate under a newly created company called Capri Holdings. This would seem to follow the model of European fashion conglomerates like Richemont, LVMH and Kering, that have consolidated many brands under one stable.

Donatella Versace, brother of founder Gianni Versace, and until now Versace's vice president and artistic director, has committed to an unspecified creative role at the new firm.

"We believe that being part of this group is essential to Versace's long-term success," said Donatella Versace in a press release. "My passion has never been stronger. This is the perfect time for our company, which puts creativity and innovation at the core of all of its actions, to grow."

Michael Kors Holdings stated that the move will allow them to further expand the Versace brand by opening 100 new stores. It also plans to expand men's and women's accessories and footwear, from 35 per cent of revenue up to 60 per cent.

"With the full resources of our group, we believe that Versace will grow to over $2 billion [£1.5 billion] in revenues," said John D Idol, CEO of Michael Kors Holdings in a statement.

The takeover follows the refinancing of the company in 2014, when US private equity firm Blackstone took a 20 per cent stake in Versace.

In the intervening years, the family continued to own the majority of the business, divided between Donatella with a 16 per cent stake, Gianni's brother Santo who held a 24 per cent stake, and the remaining 40 per cent owned by Donatella's daughter Allegra. 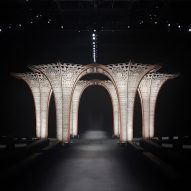 Following the acquisition by Michael Kors Holdings, the Versace family will retain a £134 million stake in Capri Holdings. Blackstone has relinquished its stake in company.

It was initially thought that Versace would make a public offering rather than selling to a private bidder.

Versace has been criticised in the Italian press for not selling to an Italian company. However, Donatella Versace hit back at those claims in Corriere della Sera, an Italian daily newspaper published in Milan where the label is based.

"In the last year Versace has been approached by many people. French, American... but no Italians. It was not us who refused to take part in an Italian group," she said to the paper.

The Italian fashion label was set up by Gianni Versace in 1978, and run by the designer until his murder outside his Miami villa 21 years ago.

The fortunes of Michael Kors Holdings contrast sharply with the fashion and homeware brand Orla Kiely, which last week shuttered its shops and called in the administrators following falling profits in a difficult retail landscape.