Designers should stop using recycled plastic and instead use bioplastics made from natural materials such as algae if they want to reduce pollution, according to Istanbul Design Biennial curator Jan Boelen.

Boelen described the trend for making products out of reclaimed plastic as "bullshit" and said it helped perpetuate the dependence on fossil-based polymers.

"I really, really think it's bullshit," he told Dezeen. "It's doing nothing. It's not changing the fundamental problem we have."

Boelen made the comments while giving a tour of the Istanbul Design Biennial, which opened this week. The event comes at a time of rising interest among designers in working with waste materials including ocean plastic and salvaged bottles.

Earlier this year, young designers told Dezeen that using recycled plastic would soon be the "the only choice".

However, the Belgian curator and educator argued that recycling helps prop up the plastic economy rather than offering a viable solution to environmental contamination.

Recycling has become a branch of the powerful plastics industry, Boelen argued, explaining why the concept has taken hold in the media, politics and the design world.

"A lot of partners have a big interest in it. It's business. It's easy, it relieves our guilt," said Boelen. "We've set up crazy systems to collect it and reuse it and these systems now need to be made viable. So we are building systems to solve a problem but they are creating a new problem."

"We need a systemic change," he added. "We should change which kind of materials we source, how we manufacture, what we use them for, everything."

Titled A School of Schools, this year's Istanbul Design Biennial features six exhibitions set in cultural institutions in the centre of the Turkish city. These explore how informal "schools" of collaborators can tackle problems or disrupt outmoded systems through design. Themes explored include time, institutional standards and certifications, and materials.

One project on show demonstrates how bioplastic derived from algae could replace traditional plastics. The project, by designers Eric Klarenbeek and Maartje Dros for research foundation Atelier Luma, demonstrates how algae can be mixed with starch to create a versatile biodegradable material.

Algae, which until recently has been viewed as an invasive species, is an abundant and completely compostable material that sucks carbon dioxide out of the atmosphere.

"You can find algae anywhere in the world," said Boelen, who is artistic director of the foundation based in Arles, France. "There are more than 100,000 species of algae. It grows very fast. You can process it and combine it with starch to create a bioplastic.

"You can 3D print with it; you can injection mould it; the next step is to make textile out of it." 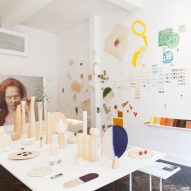 Compostable natural plastic Nuatan can safely be eaten by fish

Algae is just one natural material that can be used to make bioplastic. At London Design Festival last week, designers  Crafting Plastic Studio unveiled Nuatan, which is made from corn starch, sugar and used cooking oil.

However algae, which grows in water, could be a better choice since it does not involve using agricultural land to grow raw materials.

"You diminish food production," Boelen said. "It's better to use algae. It has to be taken seriously."

Migration tests, which determine whether a new material can safely be used to package food, are encouraging for algae-based bioplastics, Boelen said. But he added that the material testing and certifying industry is rigged against innovative new materials.

"There are bio materials that are very easy to access but they don't fit in the traditional industrial manufacturing system," he said. "We have to disrupt that. On top of that we have to adapt the laws and certifications we have in place because they are blocking real change." 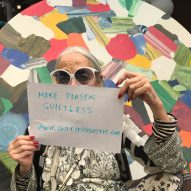 Under Boelen's creative leadership Luma Atelier, an offshoot of nonprofit arts institute Luma Foundation, is exploring how natural resources in the marshy Camargue region of southern France could be used to create sustainable materials. Besides algae, the institute is researching how salt and waste from sunflower farming could be turned into construction materials.

It is also developing its own materials testing and certifying laboratory to overcome the difficulty of getting new materials approved for use. "Norms and standards are really blocking innovation," he said.

"The plastic soup won't go away by recycling plastic," he added. "We need materials that are nearer to nature, that are in dialogue with nature. That's where the solution is."

Besides his roles at Istanbul Deign Biennial and Atelier Luma, Boelen is head of the Social Design masters programme at Design Academy Eindhoven in the Netherlands and artistic director of Z33 House for Contemporary Art in Hasselt, Belgium.