A new generation of sustainably minded designers is pioneering ways of using recycled plastic as a raw material, as concern over pollution increases.

For decades, "virgin plastic" has been used to produce everything from food packaging to furniture. But, as the environmental impact of this material becomes more apparent, an increasing number of designers are exploring alternatives.

Not only does recycled plastic offer a more sustainable solution, it is a material that is often free to source, and can be produced in a wide range of colours, patterns and textures.

"It's an amazing material, [in terms of] the things you can do with it, and it lasts super long" said Dave Hakkens, a Dutch designer who works almost exclusively with recycled plastic.

"Working with recycled plastic offers unlimited design opportunities, because of the variety of polymer compounds and processing techniques that can be used," the pair told Dezeen.

"In most cases, plastic can be found on the streets, or you can partner with businesses that like to donate their leftovers for free," they said. "This abundance of plastic in the environment creates an opportunity for young designers to start thinking."

Scientists have warned that, unless big global changes are introduced soon, the amount of plastic waste infiltrating the natural landscape will exceed 12 billion tons by 2050. Huge quantities of it are either in landfill or in the oceans, in clusters the size of countries, such as the Great Pacific Garbage Patch.

A large volume of the plastic produced is single-use, used for products such as carrier bags, drinking straws and food packaging – an issue that governments around the world are trying to target, through initiatives like the UK's 5p carrier bag charge.

But many types of plastic are easy to recycle and, if processed correctly, can offer just as many possibilities as virgin plastic.

According to Jan Puylaert, designer and co-founder of furniture brand Ecopixel, these types of plastic are so readily available that there is really no reason to manufacture new plastic.

"It will soon be the only choice," he told Dezeen. "We are running out of raw materials and their extraction is killing the earth."

"But anyhow, it is a good thing," he continued, "because we have so much plastic already that we can probably recycle for as long as we want/need."

Ocean plastic is already used by big-name designers and brands

Over the past few years, a number of well-known designers and brands have been promoting the vast potential of recycled ocean plastic.

Similarly, Adidas, G-Star Raw and Stella McCartney have all used the material in fashion collections – in partnership with environmental initiative Parley for the Oceans. In an interview with Dezeen back in 2016, founder Cyrill Gutsch said the first step to solving the issue was to raise awareness.

"Our strategy to end plastic pollution is to recognise the problem and really accept that plastic is a design failure," explained the former designer.

Ocean plastic isn't the only resource available – and other designers are trying to encourage people to recycled the waste they have at home.

Among these is Netherlands-based Dave Hakkens. For his graduation project at Design Academy Eindhoven in 2013, he built his own plastic recycling machine. He then made the plans available online, and invited others to construct their own machines and share the results via his website.

Four years later, the Precious Plastic machine has been adopted by more than 200 designers worldwide. This global community creates a wide range of products – from jewellery and textiles, to ceramics and homeware – and sells them through online retailers such as Bezar.

Hakkens launched the latest version of his machine at the recent Dutch Design Week, by transforming a shipping container into a plastic recycling workshop. He also spoke about the project as part of Good Design for a Bad World, a Dezeen talk series that explored design's role in solving global issues.

"There's a lot of plastic waste out there and we could recycle it," he said, as part of a talk focused on pollution.

"I built the machine so people could start recycling; that seemed like a good start," he continued. "We just throw the line and we see what happens, and then you see all these different sort of ways how to use the project."

"The project sort of evolves in whatever direction it's needed, to go forward to recycle more plastic."

Change in attitude is needed

A range of other innovative recycled-plastic projects were on show in Eindhoven during Dutch Design Week.

At the Design Academy Eindhoven graduate show, Shahar Livne revealed her vision of a future where plastic is no longer produced, and has instead become a rare and valuable commodity that people mine for.

Like Hakkens, she believes the material has a lot of potential, and that the biggest challenge is changing people's attitude towards it. "It's a change in value," she said.

Meanwhile, Jessica den Hartog used the design festival to showcase her research into the colour effects that can be created through recycling.

Den Hartog, a graduate from the Maastricht Academy of Fine Arts and Design, presented a library of material samples, featuring vibrant hues and unusual effects. She created these by simply sorting the plastics by colour before processing them.

Through her research, she discovered that many local councils in the Netherlands have the facilities to do this, but don't currently make use of them.

"I went to see the industry and saw the process – they put all the colours together and it comes out grey," she explained. "So it's the same as when you're painting, when you start with only grey, it's not possible to make nice colours."

Den Hartog's aim is to bust the myth that recycled plastic doesn't offer as many colour options as virgin plastic, as well as to encourage more local authorities to see the value in investing in plastic recycling.

"Plastic is my favourite material," she added. "I want to use for as long as I am a designer and I think it's important for it to be recycled, so we really need to introduce better aesthetics in the recycling process."

Recycled plastic can be a luxury material

Both Ecopixel and Polimeer have also been experimenting with innovative techniques for recycling, in a bid to promote reused plastic as a luxury material.

At Ecopixel, Puylaert has developed a range of colourful stools that are similar in pattern to terrazzo. The brand has also launched a daybed designed by prolific Italian designer Alessandro Mendini, patterned with blobs in a wide spectrum of shades.

Similarly, Polimeer's Vos and Iadarola have developed a material they call Polimarble, which is a recycled plastic with a marble pattern.

"Plastic is an engineered material, it was never crafted like metal, wood, ceramic or glass," explained the pair.

"We believe that by crafting a material originally designed in a lab, it is possible to innovate production processes and change the way plastic looks, and therefore the way people will perceive it," they continued.

"Can plastic be sexy again? Will recycled plastic ever hit the luxury market ? Can cities be self-sustainable? We are trying to give answers to these questions." 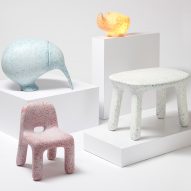