Bana is located on the ground floor of a three-storey, white 1930s building – similar to many found across the Israeli city – which is also home to offices, apartments and a pharmacy.

Amit Studio overhauled the 775-square-foot (72-square-metre) space by drawing attention to the original details, and adding hints of colour with both paint and food arrangements.

The cafe has a notable curved, white exterior and is lined in large windows, which Amit Studio painted pink inside.

Exposed brick walls and wood floors were then coloured white to create a blank slate for the interior renovation of a former designer's studio.

Bana was designed as a collaboration between chef Dan Arvatz and his sister Gali Amit, who runs Amit Studio with her partner Yoav in Tel Aviv.

With a vegan menu, the cafe uses a large supply of fresh fruits and vegetables, and these colourful groupings of produce – such as lemons and butternut squash – fill countertops, windowsills and racks on the walls. 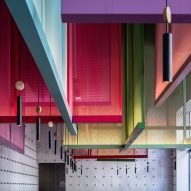 A central counter in front of the kitchen is made of marbled granite and acts as a food preparation area.

Hanging above the bar, and also on the wall behind, are metal crates painted soft green and pink, which are filled with fresh produce and potted plants.

"We designed this metal grid for the wall, as it was an abstract idea for a library, and for the display plants above the main island and bar," Gali told Dezeen.

"Our sketches were ready to be sent to a metalworker, but eventually Dan accidentally found this metal net in an America Apparel shop that was in closing process," she continued. "The idea of recycling material suited us."

A series of tables wrap around the perimeter of the cafe, with stone tops to match the bar.

A built-in bench, a high-top table with bar stools, and grey Doll chairs by Billiani also furnish the interior.

Bana has two entrances, on either end of the restaurant. At one are men's and women's restrooms, differentiated with graphics of a banana and a peach.

The cafe also includes two outdoor dining areas – facing the street and in the rear garden. Both are outfitted with sage-coloured Bistro chairs by Fermob.

Tel Aviv is flourishing with new eateries, bars and coffee shops. Recent openings include a colourful Japanese restaurant by Pitsou Kedem, and a pink cafe with mosaic marble floors by Meir Guri.