Shen Ting Tseng Architects created a canopy made from 320 box kites, which move with the wind and appear to lift this pavilion at the Taipei Fine Arts Museum off the ground.

The temporary pavilion designed by local studio Shen Ting Tseng Architects responds to the characteristics and prevailing weather of the site.

The plaza next to the Taipei Fine Arts Museum (TFAM) faces towards the Keelung River on its north side and is exposed to regular strong winds, which prompted the studio to base their concept on the memory of flying a kite.

"In response to the natural features of the site, the concept of 'floating' was derived from the specific attributes of wind and light," the project team explained.

"A kite-canopy and a curved island were joined and interlinked from above and below, in order to create a pavilion that floats on the plaza, capturing the breeze and light."

The pavilion was the winning entry to an annual competition organised by the TFAM to activate the plaza in front of its entrance. TFAM has held the competition every year since 2014, as part of its X-site programme aimed at exploring the intersection between art, architecture and events. 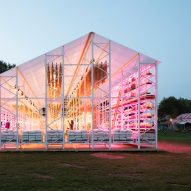 The pavilion, which served as the backdrop for the TFAM Nights events between April and July 2016, is also shortlisted in the Small building category of the 2018 Dezeen Awards.

The canopy consisted of 320 box-shaped nylon kites made by local manufacturer Huang Jingzhen Art Kites, which were attached to the podium by a framework of slender steel columns.

The kites were free to move gently when the wind blew and their surfaces helped to shade the space beneath them, creating a dappled pattern of light and shadow that shifted throughout the day.

A square base made from plywood and carbon fibre was extruded into a hill-like form at the centre of the pavilion. Inside the raised volume was a pink spherical void that could be reached through a circular opening.

"When entering into it, a unique sound effect was revealed by the spherical space," the architects described, "in which the natural elements were interwoven together, leading visitors' perception into a sense of serenity."

The pavilion aimed to achieve an overall impression of lightness, as if the canopy of kites was lifting and pulling the ground plane up towards the sky.

The creation of an intimate space at the heart of the installation offered a contrast to the open public space surrounding it, while a round hole above the central void framed a view of the kites and the sky.