Quebec City studios Hatem + D and Étienne Bernier have given a 20th-century residence a new life, by refurbishing the existing building and adding a small extension to the back yard.

The residence was built in the St-Roch neighbourhood – an up-and-coming area of Quebec City just north of its historic city centre – in 1915.

The architecture studios had limited resources for the project, and so decided to make the most with small interventions.

"It is entirely possible to obtain a contemporary residence with incredible spatial qualities on a tight budget, by keeping the focus on the priorities – the windows, for example – and the main goals," said the architects in a project description.

The pale brick facade of the existing two-storey building was refurbished, and its cornice painted a contrasting black.

This choice echoes the extension at the rear, which is clad in charred lumber planks.

A large window wrapping the lower floor of the addition is fitted with sliding glass doors. These open onto the back garden to provide an extension to the home's living area in the summer months, and bring in plenty of natural light.

"The challenge was to open up the residence to the vegetation of the garden in order to maximise brightness and integrate the backyard into the project," said the architects, noting that the surrounding streets have few trees.

The adjoining ground floor is occupied by an open kitchen, living, and dining area. The architects chose a limited palette to maximise the interior's brightness. 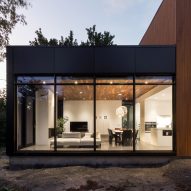 Oak Residence is a contemporary house in suburban Quebec City

"The preeminence of white and the plain wood floors create a luminous and modern ambience," the firms said.

Contrasting touches of black also feature throughout in details like window frames and pendant lighting.

Four bedrooms are located on the upper level and arranged along a corridor. Two of these face the street, while the others overlook the backyard.

A second smaller sitting room is also placed upstairs to offer a private relaxing space, in addition to bringing some light into the circulation space.

The St-Roch neighbourhood has also recently seen the completion of a Japanese restaurant, which imperfections of the existing building were exposed.

Photography is by Dave Tremblay.