New York's Metropolitan Museum of Art has revealed that its major fashion exhibition next year will explore the ostentatious and humorous aesthetic of "camp".

The Costume Institute's Spring 2019 show will be titled Camp: Notes on Fashion – a take on the name of a 1964 essay by American writer Susan Sontag, Notes on Camp.

The essay will provide the "framework" for the exhibition, which will trace the origins and evolution of camp from the 17th century to today.

"Fashion is the most overt and enduring conduit of the camp aesthetic," said the institute's lead curator Andrew Bolton in a statement. "Effectively illustrating Sontag's Notes on 'Camp', the exhibition will advance creative and critical dialogue about the ongoing and ever-evolving impact of camp on fashion."

Around 175 items will be displayed, with womenswear and menswear presented alongside drawings, paintings and sculpture in the Iris and B Gerald Cantor Exhibition Hall at The Met's Fifth Avenue location.

The exhibition will begin with a focus on the concept of se camper – "to posture boldly" – in the royal courts of Louis XIV and Louis XV at Versailles. 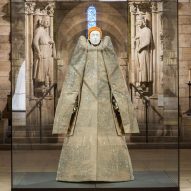 Camp's expression through figures known as dandies, and its development in queer subcultures across Europe and America, will then be investigated.

The largest section will be dedicated to how the elements of the aesthetic described by Sontag – like irony, humour, parody, pastiche, artifice, theatricality, and exaggeration – are communicated through fashion.

"Camp's disruptive nature and subversion of modern aesthetic values has often been trivialised, but this exhibition will reveal its profound influence on both high art and popular culture," said Met director Max Hollein.

"By tracing its evolution and highlighting its defining elements, the show will embody the ironic sensibilities of this audacious style, challenge conventional understandings of beauty and taste, and establish the critical role this important genre has played in the history of art and fashion."

Camp: Notes on Fashion, supported by Italian fashion house Gucci and media group Condé Nast, will open to the public 9 May 2019 and run until 8 September 2019.

The annual Costume Institute Benefit, also known as the Met Gala, will take place on 6 May 2019. Considered a highlight of the fashion calendar, the event will be co-chaired by American Vogue editor-in-chief Anna Wintour and Gucci creative director Alessandro Michele, along with celebrities Lady Gaga, Harry Styles and Serena Williams.

The Met's Spring 2018 fashion exhibition, which drew connections between Catholicism and contemporary couture, closed earlier this month after breaking the museum's attendance record.

Photography is by Johnny Dufort.