These silver mirrors are each created by Swedish designer Jenny Nordberg in less than five minutes, using a traditional process involving chemical-infused liquid.

She creates them by adapting a mirror-making technique dating back to the 19th century. Using liquid silver, she prepares a chemical solution, then pours it onto a sheet of glass and leaves it to develop.

The solution quickly evaporates, leaving a thin layer of silver on the glass surface. But as the liquid is never spread across the whole surface of the glass, each process results in a mirror with a unique aesthetic.

"I am fascinated with this concept of me being out of control," Norberg told Dezeen.

"I can't decide how they will turn out, I just pour on the liquid and then the liquid decides," she explained. "It looks like water first, and then it magically shifts into a mirror after a few minutes."

Nordberg spent six months researching and experimenting to develop her technique – so is keeping the exact method and formula under wraps. But she likens the process to the method of developing analogue photography around 200 years ago.

The project forms a continuation of Nordberg's 3 to 5 Minutes project, which she presented at Stockholm Design Week back in 2015.

Seeking to explore whether it is possible to hand-make interesting furniture items at mass-production speeds, she turned herself "into a machine". Her self-enforced rule was that each piece should be produced in three to five minutes.

"Mass production has never been my type of thing," she said, explaining her reasons behind the project.

The mirrors were presented at the Stockholmmodern gallery during Stockholm Design Week, and remain on show until 3 March 2018.

They were shown in two different styles: circular and square. The exhibition also featured a collection of pewter mirrors, creating using a similarly random technique, and a brick-inspired glass candleholders.

Other highlights from this year's edition of the annual design week included a theatrical performance inside a century-old Stockholm flat. 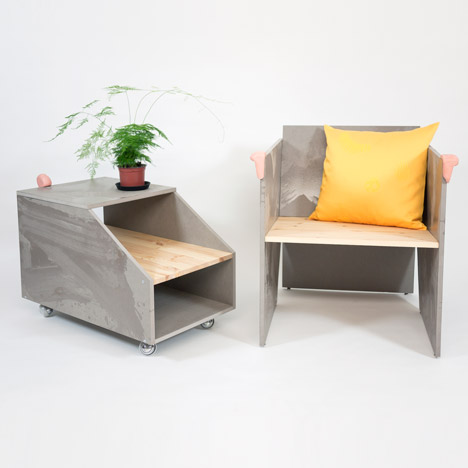