London-based Stiff + Trevillion designed the building as a flexible, creative workspace, as the architects didn't know at the time who would occupy it. Its aim was to create a memorable and characterful building befitting of the location, on the corner of Beak Street.

The result attracted Hirst's attention. The British artist purchased the property from commercial developers Enstar Capital and LandCap for £40 million through his company Science.

The 2,570-square-metre building, which comprises five storeys and a basement, will now act as the artist's main studio and art complex, as well as housing a branch of Japanese restaurant Sticks n Sushi.

Stiff + Trevillion chose glazed bricks in hues of sea blue and green for the building's facade. The architects completed the look with an art deco-style cornice, plus aluminium friezes and window surrounds – designed by artist Lee Simmons – to give the illusion of deep relief and texture.

At the base of the building, the bricks are a deep blue shade, while the main body boasts a lighter, sea green hue. The intention was to ground the structure and prevent it from appearing as one solid block, and to highlight the process of hand dipping each glazed brick.

The architects wanted these details to offer "visual stimulation" as well as to reflect the artistic context of Soho, known for its eclectic mix of shops, clubs and jazz bars.

"We wanted to design a building that would contribute to the vibrancy and creative appeal of Soho, whilst being sensitive to the surrounding brick architecture," said Stiff + Trevillion director Lance Routh.

"The level of craftsmanship and detail in the facade, combined with the distinctive colour of the brickwork, has resulted in a unique building that we hope will be an inspiring workplace for Damien Hirst and his team."

The project received planning permission in November 2015 and was completed three years later, in July 2018.

The flexible, open-plan interiors are accompanied by floor-to-ceiling windows on all levels, along with polished concrete Italianate pillars.

Now that Hirst has taken over the space, the building is being fitted out to his preferences, scheduled for completion in early 2019.

One of his requests is for voluminous double height space, so a large segment of the second floor has already been removed to create a "cathedral-like" interior with a 10-metre-high ceiling – ideal for producing and showcasing Hirst's large-scale artworks. 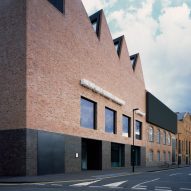 The remaining portion of the second floor now functions like a mezzanine, so can also double up as a gallery space and break-out area for creative work and client entertaining.

Various letterbox openings are cut into each floor slab that sits directly over the service corridor at the back of the building to ensure large-scale artworks can be easily moved through the space and displayed.

External roof terraces at the third, fourth and fifth levels offer access to quiet, open garden spaces in the bustle of the city, but could also act as entertaining spaces.

"This new art destination helps to bring back the artistic energy and creativity Soho was so renowned for."

Another of Hirst's London buildings is Newport Street Gallery, designed by Caruso St John Architects, which won the Stirling Prize in 2016.

Photography is by Nicholas Worley unless otherwise stated.