Called Euphoria SmartControl, the system created by Grohe is centred by a three-button control unit intended to help users "intuitively" operate the shower and make subtle adjustments to water flow during each use.

Pressing the first button activates the hand-held shower, while the second button turns on the overhead showerhead, which emits a powerful jet spray.

The third button releases a gentle, rain-like spray for users after a more relaxing bathing experience. A large temperature handle can be used to regulate hot and cold water to achieve exactly the desired temperature.

Each button has also been completed with a simple illustration that shows its specific function.

When switched off, the system automatically saves the user's preferred flow of water until the next time they shower.

"From the beginning, our team set forward with an objective to reframe the entire shower system experience by focusing on the needs of consumers," explained Michael Seum, vice president of design at Grohe.

"A 'sea of sameness' is what can be said of the shower system market prior to SmartControl, similar technologies and many lacking meaningful benefits to the consumer." 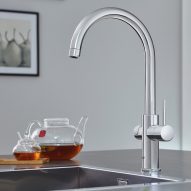 The wall-mounted shower system is available for purchase in chrome or a white acrylic glass finish. Customers can also opt for the shower head, which is 31 centimetres in width, to be circular or square in shape.

Extra features integrated into the system include Grohe's CoolTouch technology, which prevents the chrome surface of the control unit from getting too hot while in use, and a thermostat that accurately regulates water temperature.

The control unit also doubles up as a small shelf where users can conveniently store bottles of body wash or shampoo.

As well as this, the Euphoria SmartControl system has been designed slightly slimmer than Grohe's previous models so that it can fit inside smaller shower cabins. Users are also now able to vary the height of the hand-held shower and the angle of the shower head.

Grohe recently released a series of tap fittings that are able to provide homes with different types of filtered water, including sparkling, kettle-hot or chilled. Earlier this year the brand also created a water-filled installation for Milan design week, where they previewed a collection of minimalist faucets.