Rollerskating rinks, national anthems and the humble table are just some of the points of reference for contestants in this year's Rigg Design Prize exhibition, which celebrates the best of Australian interior design.

The triennial prize – which has been hosted by Australia's National Gallery Victoria (NGV) since 1994 – sees 10 of the country's most prominent interior designers and decorators create a bespoke room within one of the gallery's exhibition spaces.

This year's participants were asked to work under the theme of Domestic Living, and consider how interiors can serve as a "form of communication embedded with values, ideas and stories".

Design studio Hecker Guthrie were awarded first place for its interior titled The Table is the Base, which honours the piece of furniture as a "modest yet powerful object" that is able to bring people together through eat, work, and play.

The room features terracotta-hued walls and a series of different-sized wooden tables sat upon a timber platform. Dotted throughout are typical home fixtures and furnishings such as basins, cupboards, and pen pots.

"Domestic living, for us, is the ultimate expression of everything we do. It draws upon the ultimate emotive response to space – it's where we're at our most vulnerable and most comfortable," explained the studio's founders Paul Hecker and Hamish Guthrie.

"The table has been a common thread that we engage with through all of our projects, we're always exploring the table as that 'thing' to anchor space, it has that unifying element." 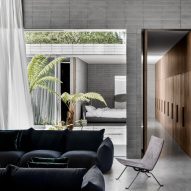 Eight Australian homes that show the best interior design down under

Alongside the winning interior, highlights of the exhibition include Brustman's vivid room titled Inner-Terior, which takes design cues from rollerskating rinks, retro amusement park rides, and 1980s fantasy film Xanadu. At its centre lies a curved seating nook illuminated by a pink and yellow-striped neon archway.

Arent & Pyke created another stand-out interior by using bespoke furnishings to establish a more restorative atmosphere in their space, which has been loosely divided into areas for bathing, resting and dining.

Amber Road attempted to merge indoors and outdoors with their verandah-like room, which features a star-printed ceiling and rust-coloured walls to emulate the landscape of the Australian desert, while the tones and textures in Flack Studio's interior are directly influenced by lines in the country's national anthem including "we've golden soil and wealth for toil".

Dezeen recently celebrated Aussie interior design by selecting eight of the country's most striking homes, ranging from an all-white residence in Melbourne to a pared-back property in Tasmania.