Australian architect and designer Ameé Allsop has launched a minimalist furniture collection made from bleached American ash and travertine.

Called Pure Minimalist the collection features simple tables and chairs made from flat planes of American ash and an angular bookshelf made from travertine.

"My love of home and the art of living has lead me to design this collection," said Allsop. "There is architecture in everything."

Sydney-born Allsop said that the collection's clean lines, pale colours and natural material palette were informed by the minimalist art movement of the late 1950s, as well as the beach landscape surrounding her home in the Hamptons – a group of villages at the east end of Long Island, New York.

For Allsop, who has worked as an architect in both Sydney and New York over the past 12 years, Pure Minimalist is her first furniture collection.

"It's no mistake that the collection embodies the minimalist beach landscape of the Hamptons," commented Allsop, who recently moved to the area from Brooklyn.

"Despite designing furniture for many years throughout my architecture projects, my own recent sea change inspired the realisation of the first coherent collection."

"I wanted the beauty of the material and the simple proportions to be the primary focus. The pieces are not demanding attention but their presence is certainly felt," she continued. 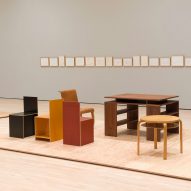 All six pieces in the collection – a club chair, dining table, dining chair, nesting coffee table, benches, and shelves –were designed in the Hamptons and handmade in New York.

Elsewhere in the Hamptons, architects have been inspired by the area's vernacular architecture to create new minimalist homes.