Dutch architecture firm MVRDV devised the subtle yet eye-catching rainbow facade for the multi-faceted mall to be a happy middle ground between the developer KWG Group Holdings's wish for a building that would stand out, and the city government's caveat that it suit its surrounding.

Rather than cover the shopping centre in bright LED lights, the architects covered each side of the 36-metre high building in opalescent tiles. Some sides are completely covered in the tiles, with other planes tiled in an interlocking checkerboard pattern that forms a perforated screen.

Each ceramic tile was hand-glazed in China, with three layers applied and fired at different temperatures to create the pearlescent effect.

"We designed the KWG M Cube so that the building continuously displays new patterns and colours. Depending on the weather and light conditions and where you stand, the facade might look subtly grey, or it might shine with all the colours of the rainbow," said Jacob van Rijs, principal architect and co-founder of MVRDV. 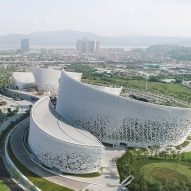 "In this part of Beijing, there are restrictions on architecture and many nearby buildings are completed in shades of grey and beige. Our solution allowed us to do exactly what the client and the city wanted: to create an attractive visual statement in which exuberance and modesty go hand in hand."

The 40,000-square-metre, seven-storey shopping centre is split into two sections. Downstairs, the lower three floors contain mostly shops and is only open during the day. The upper levels contain bars, restaurants and cafes, and can be accessed at night via an express lift to the fourth floor lobby.

Open air roof terraces in each level provide an outdoor space for visitors during good weather, with views towards local landmarks including the Forbidden City.

Rotterdam-based MVRDV has form when it comes to glistening buildings. A recently completed entertainment complex project from the Dutch firm in South Korea featured buildings with golden facades, and a planned office block in Germany will be covered in crystal-like mirrors.