Architect Amin Taha explains his aim to capture the "innate beauty" of natural stone with his 15 Clerkenwell Close housing project, in this movie produced by his studio.

The stone-framed London building contains eight apartments, including Taha's own home, and the office for his studio Amin Taha + Groupwork. But the building, which is shortlisted for a Dezeen Award, is facing demolition following a row with Islington Council.

In the film, Taha says one of the building's best qualities is that it stands out from its surroundings.

"It's interesting and unique to look at, it doesn't follow an individual style," says Taha in the movie. "I think its that uniqueness that people are looking at."

The housing block's key feature is its framework of raw quarried limestone. It provides both facade and structure.

"What you see really is the way previous generations used to build, which is the structure – whether its brick or stone – is the superstructure of the building. It's holding the building up," explains Taha.

"At the same time it's manipulated in a certain way to create an architectural aesthetic." 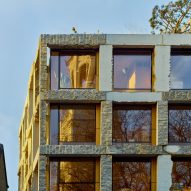 "Just because a building looks ugly, it doesn't make it a bad building"

Taha says the decision to take this approach was the result of researching the buildings that previously stood on the site.

"You have to spend time researching not just the physical area but also looking into the background, the historical background of the area," he says.

"Historically the first structure on the site was an Augustinian nunnery, built not long after the Norman invasion. It was in limestone, keyed in limestone, which was quite unique at the time. So the eventual decision to go for stone rises from that historical context."

Taha was issued an enforcement notice for the building's demolition, for the reason that the natural stone used is not fully detailed in the planning application. It cites the location of fossils as a particular problem.

However Taha believes that leaving the stone unfinished adds to the building's beauty.

"That is the innate beauty in the stone itself, and you wonder why you'd want to get rid of that and then carve something else into it. The natural beauty of materials is allowed to speak for itself."

The building has also been criticised for not being in keeping with the historic context of Clerkenwell. But Taha explains that a large number of the buildings in the close were only built in the past 40 years.

"Actually more than 50 per cent of the close is 1970s and 80s. They are half-brick thick skins sitting in front of a steel- or concrete-framed structure. Neither do they use the correct proportions or correct brick arches or lintels," says Taha.

"So those are very commercially expedient ways of buildings. Lets design something that apparently appears to be something from the past, it sort of dilutes the real heritage that we have – the original real Victorian and Georgian buildings."

Also in the movie Andrew Baughen, former vicar of the adjacent St James's Church, explains that the building is drawing more people to the area.

"We want the church to be at the centre of Clerkenwell, rather than in a backwater. So this building helps to to make this area of Clerkenwell more of a go to place," says Baughen.

"My personal opinion is that its the first building of real merit probably since the church was built and I hope it's the first of many buildings in Clerkenwell Close that we can be proud of for generations."

Taha's building is one of five shortlisted in the housing category of Dezeen Awards, alongside an apartment block in an inner-city suburb of Melbourne and an affordable housing development in China's Fuyang District. The architect is currently appealing the demolition notice.

Video is by Portland Communications. Photography is by Timothy Soar.