Here's a detailed look at 15 Clerkenwell Close, the housing block built by Amin Taha + Groupwork with a rugged structure of raw quarried limestone, which is currently under threat of demolition.

The London housing block contains eight apartments, including the home of architect Amin Taha and the studio of his architecture practice Amin Taha + Groupwork.

The project, which is shortlisted in the housing project category of Dezeen Awards 2018, is facing demolition less than a year after completion. The local council issued an enforcement order, because the natural stone used on its facade is not fully detailed in the planning documents.

The six-storey block is located in a historic area and is surrounded by brick-clad buildings that were erected in the mid to late 20th century, but are intended to evoke the area's architectural heritage.

Rather than introducing another building that continues the aesthetic of the existing streetscape, Taha chose to use stone to reference a ruined abbey that forms part of the neighbourhood's rich history.

"Today Clerkenwell Close is mostly made up of half-brick stretcher bond, pseudo pastiche facades, unable to quite tell which period or architectural language they represent," the architect said.

"15 Clerkenwell Close replaces one of these and aims in some way to better connect and represent the past with a broader contextual understanding than skin-deep imitation, at first contemporary but reminding us of the all-but-vanished 11th-century limestone Norman abbey."

The building occupies the full extent of the site and features a roughly cube-shaped form, which is emphasised by the stone grid that encloses large square windows.

Taha wanted to construct a superstructure that ensures the use of stone is more than merely decorative. The choice of material also reduces the embodied carbon of the structure by 90 per cent compared to typical steel or concrete frames.

The limestone columns and beams feature a variety of textural finishes that express the different ways the stone is treated.

Some surfaces are rough and straight from the quarry, while others are smooth or scored by marks made during the extraction process.

The stone framework is separate from but structurally connected to the building envelope, which allows for the creation of a continuous curtain wall set back from the facade. 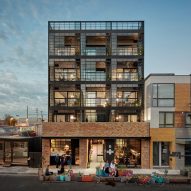 At the base of the building is a fallen column with a partly carved ionic pilaster. This folly is intended to reinforce the narrative of the building as a relation of the adjacent St James's Church and its Norman predecessor.

Other details that emphasise this link to the past include the use of stone and brass, as well as scallop-shell-shaped handles and pebble mosaic floors that introduce moments of tactility and whimsy to the street-level spaces.

The building features dedicated entrances for the apartments and offices. Both entrances are connected to a central services core by bridges that extend above the double-height office situated on the lower-ground floor.

The office is entered from a cloister running along the side of the site. Its entrance bridge connects with a glazed meeting room perched on a pair of steel beams that traverse a lounge area below.

Above the ground floor, a further five storeys accommodate eight apartments, including Taha's own home, which occupies the whole of the top floor.

The block is shortlisted on Housing project category of Dezeen Awards 2018, alongside an affordable housing development in China's Fuyang District and an apartment building in an inner-city suburb of Melbourne, with metal-framed winter gardens.