British architect Norman Foster, founder of Foster + Partners, has temporarily suspended himself from the advisory board of Saudi Arabia's Neom project, in response to Jamal Khashoggi's murder.

The Saudi Arabian government has admitted to the killing of dissident journalist Khashoggi in the Saudi Arabian consulate in Istanbul on 2 October 2018, after weeks of conflicting accounts.

Foster distances himself from project

A spokesperson for Norman Foster confirmed that he has suspended himself from the board of Neom, a £382 billion Saudi Arabian government project to build a fully automated mega-city.

"Last week Lord Foster wrote to the head of the Neom advisory board stating that whilst the situation remains unclear he has suspended his activities in respect of the board," the spokesperson told Dezeen.

Turkish president Recep Tayyip Erdogan addressed his MP's today about the "savage" murder of the Washington Post contributor. He claimed Turkey has strong evidence of the premeditated killing, and has called for the suspects to be tried in Istanbul, reported the BBC.

Khashoggi's body has still not been found. In the days leading up to his death 15 Saudi Arabian nationals, including a doctor carrying a bone saw, flew into Istanbul where according to the Turkish government they tampered with security cameras and visited a nearby forest.

Plans for Neom, a 10,000-square-mile city that will stretch across the borders of Saudi Arabia, Jordan and Egypt, were announced by the Saudi government last year.

Populated by more robots than people and powered by fields of solar panels and wind farms, the city is part of Saudi's Vision 2030 drive to pump the kingdom's oil wealth into renewable energy resources. 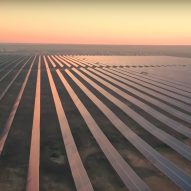 Operating as an independent economic trade zone beholden to its own laws, Neom promises a city where mundane tasks are performed by robots and driverless cars, and it's human occupants are fed from vertical farms and solar-powered greenhouses.

Other board members deny involvement

Details of the 19 members of the Neom advisory board were released on 9 October, just days after Khashoggi went missing.

Apple hastened to distance itself from the project, with a spokesperson claiming that Ive's inclusion was a mistake. Doctoroff also claimed to have been mistakenly named as a board member, but is still pictured amongst the remaining 18 members on Neom's website.

A spokesperson for Carlo Ratti told the Architect's Newspaper that the Italian architect and his team were monitoring the situation "hour by hour", but would await the result of the US investigation.

Director of the CIA Gina Haspel is reportedly travelling to Turkey to investigate the journalist's death, after president Donald Trump told reporters on Monday that he was "not satisfied" with what Saudi officials told him.