Developer Related Companies released photos of the 637-square-metre property to coincide with its recent market listing.

The residence, which occupies the final three floors of the 11-storey luxury condo building, is currently listed for $50 million (£38 million) – the most expensive of the 39 condos inside the block that Zaha Hadid Architects (ZHA) completed earlier this year.

A kitchen, an open-plan lounge and dining room, a library and five bedrooms are hosted across the first two levels, while the third is slightly smaller to make room for a huge rooftop patio. Finishes are simple throughout, including wooden floors and walls painted in muted hues.

A key feature is the sculptural, white staircase designed by late architect Zaha Hadid – who led the project. The curvaceous lacquered banister twists up and around a light well, drawing on the curvy forms of the metal window frames on the exterior, as well as past projects by Hadid.

"Within the penthouse, this centrepiece is manifest as the sculptural staircase that extends all three floors, connecting its interior with the large outdoor terrace," said ZHA project director Johannes Schafelner in a project statement. 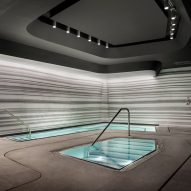 "An evolution of the flowing spiral staircases within Zaha Hadid's cultural buildings, this staircase is designed with multiple perspectives that engage perception and draw the eye from the horizontal to vertical – uniting the penthouse's three levels with the fluid design language of the building's facade."

A sinuous white kitchen island that Hadid designed with Italian brand Boffi, which can be found throughout the building, also follows this style.

The penthouse comes with 2,552 square feet (237 square metres) of private outdoor space, which includes the top-level terrace that hosts an outdoor kitchen, dining area and lounge, as well as a series of beds for sunbathing. The master bedroom also has private balcony, along with a full dressing room, and a pair of bathrooms.

A private lift offers direct access into the apartment, while another is located inside to be used instead of the staircase.

Residents will also be able to use 520 West 28th's other amenities, including skylit swimming pool, a striated IMAX theatre and a bright gymnasium.

Hadid designed 520 West 28th Street in collaboration with partner Patrik Schumacher, who took over as director of ZHA after her death in 2016. The building is the architecture firm's first completed project in New York City.