Zaha Hadid Architects has designed a customisable kitchen island for Italian brand Boffi, which is fitted in apartments of the firm's 520 West 28th project nearing completion in New York's Chelsea.

The British firm based the curvaceous Boffi Cove kitchen on the forms of its famous MAXXI National Museum of XXI Century Arts in Rome and the Heydar Aliyev Center in Baku.

The shape of the counter curves around a large cavity carved into the front, which creates a space for stools.

Appliances and cabinets with fitted storage containers are placed discreetly on the other side, featuring seamless handles, while a sink is incorporated into the top.

As with the Boffi Code designed by Italian architect Piero Lissoni, launched last year, customers can tailor the Zaha Hadid kitchen to their choice of materials and layout.

The unit is available in two standard sizes, but also customisable to precise specifications, and in a variety of finishes and materials including marble, wood and Corian.

Boffi launched the Cove kitchen at its Soho showroom in New York, presenting a version with a glacial white Corian top and a dark walnut underside. The launch coincides with the city's NYCxDesign festival, taking place from 3 to 24 May 2017.

The kitchen units are installed inside the apartments of ZHA's 11-storey luxury condo building beside New York's High Line park, as shown in images of model apartments released last month.

Zaha Hadid Architects topped Dezeen Hot List in 2016, following the surprise death of its founder earlier in the year.

Other commercially available products first created for residential projects in the city include the VIA57 chair, designed by BIG for its tetrahedron-shaped tower on the West Side and produced by Danish brand Fritz Hansen. 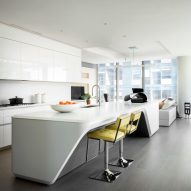