UK architects have attacked the government's new Building Better, Building Beautiful Commission, which has been set up to improve the design quality of homes and places.

The commission, announced on Saturday by housing secretary James Brokenshire, aims to prevent "poor quality design and build of homes and places".

Architect Charles Holland has described it as "a tedious hangover from the 1980s", while Holland's former partner at FAT, Sam Jacob, said it was an attempt to recreate an "a-historical fantasy [to] appeal to blinkered, quasi-fascist old white men".

Roger Scruton, a writer and philosopher who has long championed traditional architecture, will chair the new body. Scruton is an an outspoken critic of contemporary architects including Rem Koolhaas, Norman Foster and the late Zaha Hadid.

"This is the same old binary argument about traditional rather than contemporary architecture, which feels like a tedious hangover from the 1980s, a pantomime Prince Charles speech reverberating forever," Holland told Dezeen.

The three main objectives laid out by the commission are to promote more beautiful buildings and places, facilitate consent from communities with new developments, and improve the planning system to work with "better design and style, not against it".

Brokenshire said the Building Better, Building Beautiful Commission would "kick start a debate about the importance of design and style" and ensure new developments were built to last.

Architecture critic and Dezeen columnist Owen Hatherley told Dezeen he found it "deeply mysterious" that the Conservative government had "decided to re-fight the architectural culture war of the 1980s".

"What makes it especially strange is that, since the end of the New Labour dominance, housing has been dominated by the neoclassical structures of the London Design Guide, with its mandatory Georgian brick grids," Hatherley said. 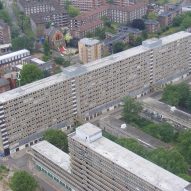 "We're asked to play a silly game where we look at a jpeg of a crap steel-and-glass commercial building next to a crap fibreglass Palladian one, and decide which we think looks nicer," he added.

"If they have any self-respect whatsoever, architects need to refuse to play that game".

Holland expressed concern about the "deeply conservative tastes" of those involved with the commission, such as centre-right think tank Policy Exchange.

"I have nothing against beauty being discussed in relation to architecture," said Holland.

"But I object to beauty being defined in such narrow and predictable terms – yet more neo-Victorian and neo-Georgian housing – and I consider the polling that underlies this initiative to be deeply suspect."

Architecture that appeals only to "quasi-fascist old white men"

Together with Create Streets, Policy Exchange authored a report in 2013 that laid out the case for demolishing high-rise social housing in favour of "real streets", citing issues such as crime on housing estates.

Holland said he supported the commission's drive for local communities to be more involved in decisions, but that the commission's focus on beauty is a "vehicle for a patently ideological programme to attack contemporary housing and undermine the architecture of social democracy".

Hatherley accused the think tank of campaigning to "make thousands of council tenants homeless for the sake of aesthetics". He also drew links between the commission and the rising popularity of an "alt-right fringe" of Twitter accounts celebrating traditional architecture.

The Building Better, Building Beautiful Commission was announced at the start of a month of Policy Exchange events focusing on beauty in the built environment.

"The commission is clearly just a front for the continuing attack on progressive ideas about cities," Jacobs told Dezeen.

"Apparently its not enough for a right-wing ideology to systematically dismantle the city built by the post war consensus – one that aimed for increasing inclusivity, accessibility and provision for all."

"It now wants to erase the agency of architecture and planning to hard-wire progressive ideas into the fabric of the world, and seeks to enforce a singular, a-historical fantasy featuring a few fragments of architectural reference that appeal to blinkered, quasi-fascist old white men."

Much of the outrage was directed at the decision to name Scruton, who has previously dismissed contemporary buildings as "throwaway architecture", as chair of the commission.

"Roger Scruton has spent decades decrying modern culture of all types," Murphy said, adding that he had recently "become a darling of an alt-right aesthetic movement".  The alt-right is a neo-fascist movement operating primarily online and centred around an ideology of white nationalism.

"The fact is that architecture has left the culture wars of the 1980s far behind, and the best contemporary work gets closer to a synthesis between timeless pattern and contemporary technique than ever before," said Murphy.

"Our housing crisis has almost nothing to do with aesthetics, modern or traditional, but rather is to do with land, wealth and exploitation. This commission is just an easy distraction from far bigger problems that the government have no intention of doing anything about."

In contrast, RIBA President Ben Derbyshire hailed the announcement as a chance for architects to be placed at the forefront of design decisions.

"I welcome the government's work to champion design quality and hope that this new commission on beauty will put architects...at its heart," Derbyshire said.

"Without the skill and expertise of the UK's world-leading architects there is a risk that 'beauty' becomes a single identikit style, failing the communities so desperate for high quality, sustainable homes."

New buildings must not "spoil beauty" of Britain, says Scruton

Scruton said his role would help balance the need for housing with preservation, and protect the public from architects "imposing" their own aesthetics.

"I am hoping to reassure the people of Britain that building hundreds of thousands of new dwellings does not mean spoiling the beauty of their country," he told Dezeen.

He suggested that the public favours traditional architectural styles, rather than modernist buildings by architects such as Le Corbusier and Mies van der Rohe.

"I want to give the public the opportunity to have the kind of architecture they would vote for, not the kind that is imposed on them by the disciples of Le Corbusier and Mies, for whom popular taste is merely an obstacle to 'progress'," Scruton said.

"Whether this is reigniting a culture war I do not know," he added.

"But it does mean seeing things as they are, and acknowledging the sovereignty of aesthetic judgment."